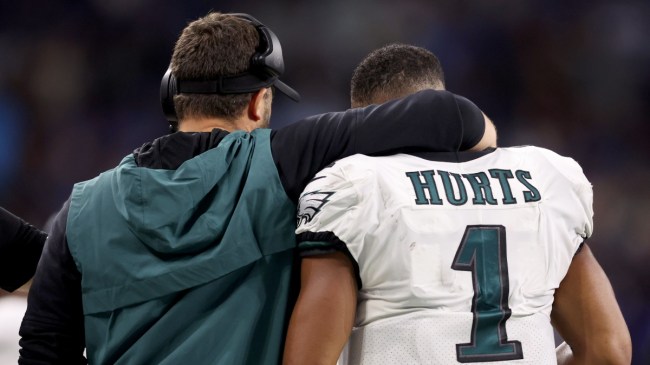 The Philadelphia Eagles routed the New York Giants 38-7 to advance to the next round of the playoffs. After the game, head coach Nick Sirianni spoke with the media.

During that time, the Eagles’ head coach was hyping up Jalen Hurts. However, he might have gotten a little carried away as he made a comparison that has sports fans raising their eyebrows.

According to the Action Network, Nick Sirianni had nothing but praise for his star quarterback. Which is understandable considering Jalen Hurts plays a major role in this team’s success. Even so, some sports fans are bothered by the comparison Sirianni made, as he claims Hurts is “like Michael Jordan.”

Nick Sirianni with some high praise for Jalen Hurts 👀pic.twitter.com/c0ClDmUvO1

That’s a pretty bold comparison to make. Especially considering many regarded Jordan as the greatest basketball player of all time. Meanwhile, Jalen Hurts has one playoff win under his belt. Additionally, the Eagles quarterback is still in the beginning phase of his sports career. So, we’re not entirely sure how either of these guys is alike at all.

As you can imagine, sports fans voiced their opinion about Sirianni’s claims.

The disrespect to Michael Jordan. This guys a clown.

The disrespect to Michael Jordan. This guys a clown.

The most relatable GIF to that statement.

Hey, we like Jalen Hurts and think he’s a phenomenal quarterback. But can we hold off on Michael Jordan comparisons for now? Let’s wait several years before making these types of statements next time.