Nick Sirianni Continues To Get Roasted For His Pizza Preferences 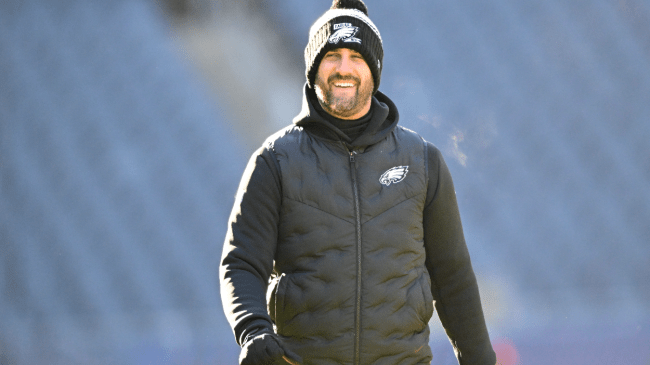 Philadelphia Eagles head coach Nick Sirianni is on top of the world in his second season at the helm. He’s got his team positioned for a potential Super Bowl appearance after winning an NFL-best 14 games in the regular season.

Philly is gearing up for an NFC Championship matchup with the San Francisco 49ers, with hopes of keeping their dream campaign alive.

While he’s been winning fans in Philadelphia over on the field, he’s landed criticism for some questionable choices off of it.

Sirianni has celebrated each of the first two playoff weekends with his team, holding watch parties for Eagles staff and players to view upcoming opponents. On both occasions, the head coach ordered pizza. And in both instances, he failed miserably in his pizzeria decision.

He’s rightfully getting roasted for his choices.

Nick Sirianni said he and the team watched the wildcard games while enjoying a few slices of stuffed crust pies from Pizza Hut.

“I was kind of craving a Pizza Hut stuffed crust pizza because I haven’t had that in a while. That’s not something I get to get at home. So, we had that in the offensive staff room.”

The NFL must’ve gotten ahold of the head coach because he switched over to the NFL’s new pizza sponsor for the divisional round matchups. He had Little Caesars while watching the 49ers beat the Cowboys over the weekend.

Does he realize he lives in one of the top pizza stops in the United States?

Philly was ranked the No. 4 pizza city in the nation by Rent.com and No. 5 in the US by TheTravel.com.

One person wrote, “Please tell me this is a bit,” in response to hearing Nick Sirianni’s pizza selection. Another fan said, “This is criminal.”

The reaction didn’t end there.

You're in a city like #Philly with tons of great pizza shops, your last name is Sirianni…and you're getting your pizza at Little Caesars and Pizza Hut? Major violation, Coach. https://t.co/mXgGK1Shft

He might as well go for the trifecta and hit Domino’s if they make the Super Bowl.