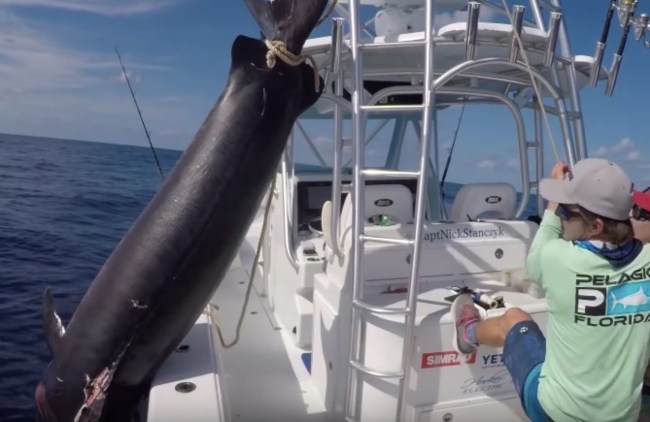 What’s up, guys? I meant to cover this record-setting swordfish catch from Captain Nick Stanczyk last week but I was still on paternity leave. I snuck news of this record swordfish into the bottom of another article about Greg Norman catching a world record-sized hammerhead, but Capt. Nick just uploaded full footage of this catch to his YouTube channel so I thought I’d bring you guys all of the details.

He caught this dinosaur-sized fish on March 31st fishing out of Bud N Mary’s Marina in Islamorada in The Florida Keys. If you’re an avid fisherman and the name Capt. Nick Stanczyk doesn’t ring a bell, it should. He catches more swordfish each year than any other captain in the world and that’s a fact. Seriously, he wins the IGFA award for tagging and releasing more swordfish than any other captain on the planet (he did tie with another guy last year or the year before, I forget).

Nick specializes in daytime trips for swordfish out of Islamorada and this 757-pound fish was the largest he’d caught in his career. The reigning world record for Broadbill Swordfish is one of those records that everyone accepts will never be broken. Mostly because fish this size don’t exist anymore. The all-tackle IGFA record for Broadbill Swordfish is 1,182-pounds and that fish was caught in Iquique, Chile back in 1953.

Nick uploaded this video below along with a bunch of photographs to his Instagram so check out this gargantuan specimen that probably fed the entire island of Islamorada for a week:

I can’t believe it took them EIGHT HOURS to reel this in!

Going through some more pics of yesterday’s giant swordfish!! Can’t believe it finally came together after all the days out there and we were able to put a 757 lb broadbill swordfish on the dock off Islamorada with Bill, Debbie, and Konnor!! It was 8 stressful hours battling her! #BroadMindedFishing #CaptNickStanczyk @pelagicgear #pelagicworldwide @freemanboatworks #freeman37vh @budnmarysmarina #bnmu #budnmarys @pennfishing #pennfleet @hookerelectricreels

One thing I love about this captain, and I can’t wait to go fishing with him one day because of this, is how un-superstitious he is. Most fishing captains will throw you in the water if you bring a banana on their boat but Nick makes it a point of eating bananas out there on the water if things are going slow. He marches to the beat of his own drum.

The @stanzfam. Plus another banana gift lol. This one from @the_reel_mr_k_

You can click through on that ^ and check out his Instagram story too as he travels through New Zealand.

Also, I’d like to send a random shout out to this Kiwi angler who set two swordfish records in back-to-back days two years ago when he caught these fish on light tackle.