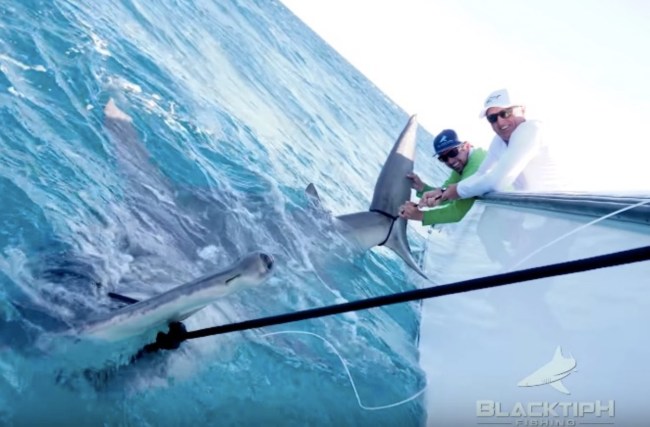 Greg Norman had one heck of a day on the water recently. During his golfing heyday, ‘The Shark’ had 20 wins on the PGA Tour, 14 wins on the European Tour, and he won the Open Championship Twice.

He’s a native Australian but he’s lived in the state of Florida for just as long (if not longer) than he lived in Australia. I mention this because Florida and Australia are basically two of the world’s most popular fishing destinations. Off the golf course, Greg Norman‘s been fishing for most of his life.

Norman didn’t get his nickname of ‘The Shark’ by anything to do with catching fish, it was all about his style of play on the course. But he’s certainly living up to the more literal interpretation of his nickname these days. Also, while we’re talking about potential world/state record fish make sure to scroll all the way to the end because I’ve included Capt. Nick Stanczyk’s recent pending Florida state record 757-pound broadbill swordfish which is big enough to swallow a Great Dane.

On a recent fishing trip with Josh from BlacktipH, the largest fishing channel on YouTube, Greg Norman landed and released a MASSIVE hammerhead shark that measured longer than the current IGFA hammerhead fishing world record. They didn’t throw this shark on a scale because it’s a protected species and they released it back into the ocean, but this ENORMOUS hammerhead measured a ridiculous 175 inches (14ft and 7 inches).

Check out the action in the latest BlacktipH episode:

Here’s the description of the YouTube video just in case that helps add some context to what was going on above:

In this episode of BlacktipH, Greg Norman and I catch a massive hammerhead shark that was bigger in overall length than the current world record. I was flying my drone and found a monster hammerhead shark chasing a blacktip shark, trying to eat it. We hooked a blacktip shark and moments later, a massive hammerhead shark swam by the boat and proceeded to eat the blacktip shark that we hooked. I managed to capture the entire feeding behavior with my drone! Greg fought the shark for nearly an hour with heavy tackle. The size of this shark was massive, larger than we imagined! The overall length of the shark was 175 inches (14ft and 7 inches), literary the largest hammerhead shark I’ve ever seen! Myself, Greg and Ryan decided to jump in the water with the shark before the release. This was such an incredible experience! Greg caught and released one of the largest hammerhead sharks ever on rod and reel!

If you’re not following the BlacktipH channel on YouTube yet you can click here to subscribe. Josh has caught some incredible fish with all walks of life but I tend to love the videos where he gets pro athletes out on the boat. From catching Goliath Grouper with a few pitchers on the New York Mets to NFL athletes to ice fishing with Donald Trump Jr., he puts everyone on the fish and as you saw above, sometimes those are potential world record-sized fish.

While we’re on the topic of record fish, check out this ABSO-FUCKING-LUTELY GIGANTIC broadbill swordfish caught by Capt. Nick Stanczyk in Islamorada, Florida while fishing out of Bud N Mary’s Marina. This is a pending state record, measuring in at a whopping 757-pounds. Nick tagged (caught) more swordfish last year than any other fishing captain on the ENTIRE planet and this is the biggest one he’s ever caught, over 150-pounds bigger than this PUMPKIN 600-pounder he landed last year:

As always, if you’ve got any badass fishing videos or photos you want to see featured here on BroBible you can hit me up on Twitter at @casspa or you can shoot me an email at cass@brobible.com!