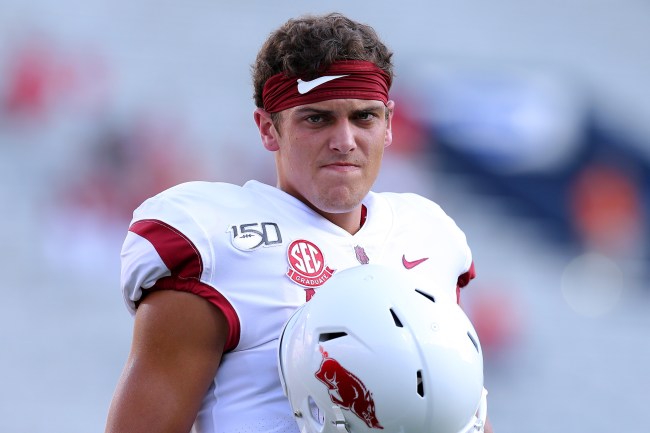 Many are calling Arkansas 31-24 home loss to San Jose State on Saturday “rock bottom,” considering the loss drops the Razorbacks to 2-2 on the season, with their latest L coming against a team that had beaten just two FBS teams since the start of the 2017 season and who secured their first win over a power conference opponent since 2006.

Arkansas quarterback and Texas A&M transfer Nick Starkel had a roller coaster of a game, in which he threw for 356 yards and three touchdowns but added a yikes-worthy five interceptions in the loss, two of which came inside the San Jose State 20-yard line. Starkel’s six picks on the season are the most in the SEC.

Starkel is also an avid Justin Bieber fanboy, who when still enrolled at Texas A&M tweeted a highly produced video to Ellen Degeneres in hopes of meeting the pop star.

After the game, in which coach Chad Morris called “completely unacceptable,” Starkel tweeted that he let the whole state of Arkansas down and promised to respond. He also admitted to ripping up and throwing away the once-cherished Justin Bieber shirt he wears under his uniform.

Bieber shirt has been ripped in half and thrown away. No more nonsense. No more distractions. All I’m focusing on is this team and this season. Nothing else. ✌🏼

Welp, it looks like the Biebs caught wind of the snub and took to Instagram to let his 119 million followers know that he is “disappointed” in his biggest fan blaming him for losing to a team that went 1-11 last year and opened this season with a three score loss to Tulsa.

2019 hogs is Justin Bieber being disappointed at Nick Starkel for throwing away the game day Bieber shirt… what a time to be alive pic.twitter.com/hLCm5n6Wwq

It’s one thing to throw a billion picks against a bad team, and it’s a whole other animal to have your idol disappointed in you. Not angry, just disappointed.

Thoughts go out to Nick Starkel during this difficult time.