Nick Young Reveals How Kobe Bryant Bullied Jeremy Lin In Practice, Said It Was Tough For Kobe To ‘Let Go’ 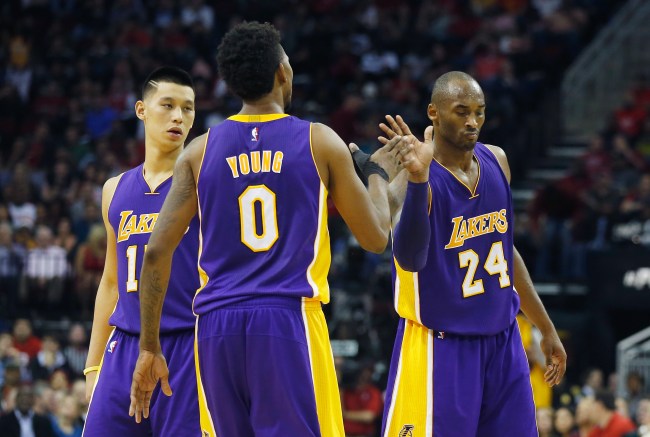 Kobe Bryant and Nick Young’s personalities go together like oil and water. Or farts in an elevator. Or Lena Dunham and Dan Bilzerian.

Kobe is a sociopath who would sacrifice a Gerber baby for a game-winner, whereas Nick Young always has a smile on his face like he just took down a gravity bong and is watching Ratatouille on Blu-Ray.

This temperamental difference is why the two have toed the line between playfulness and ‘Kobe might kill this man’ since becoming teammates in 2013. Name one other player who would publicly poke the bear like this. Shaq never even did this shit.

Nick Young on why/how Kobe-less Lakers played so well vs. GSW: "Some guys just played like 'Django Unchained.' They were free tonight."

The Mamba ultimately got the last laugh after his 60-point game to end his career. Nick Young approached him to sign his sneakers for an autograph and Kobe tossed them in the trash.

Young appeared on the Uninterrupted podcast to reveal more stories about how insanely competitive Bryant was and how flat-out verbally abusive he could be. Say a prayer for Jeremy Lin.

Kobe vs. Nick Young vs. Linsanity@NickSwagyPYoung reveals what REALLY went down during the “Soft Like Charmin” Lakers practice

Nick Young: Nobody in the world can guard me.

Kobe: Lucky I’m not from this world.