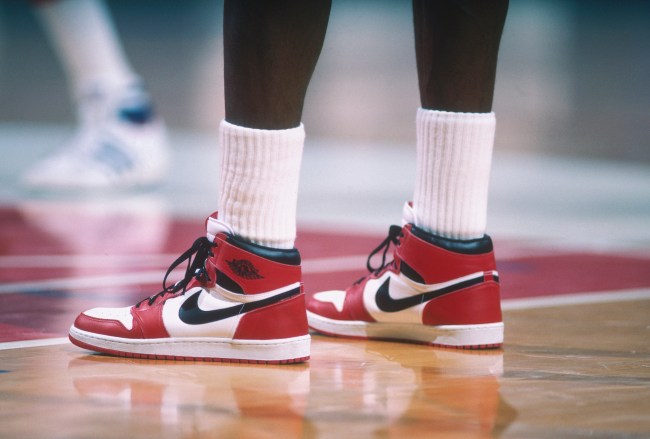 A few weeks ago I was sounding off about how I never understood how trading cards could sell for hundreds of thousands of dollars more than autographed jerseys or sneakers. Ultimately, I came to a conclusion of ‘to each, his own’ and realized just because I think an autographed game-worn jersey should be the most valuable category of sports memorabilia that doesn’t make it so.

I’m not sure I’ll ever be able to wrap my mind around the Honus Wagner 1909-11 T206 baseball card selling for over $3.2 million. But this latest record-breaking auction from Sotheby’s makes sense to me. Someone spent over half a million dollars on a pair of 1985 game-worn Michael Jordan shoes.

The Nike Air Jordan 1 sneakers sold for a record-breaking $560,000 which breaks the record for the most expensive sneaker ever sold. The previous record was the Nike “Moon Shoe” which last year sold for $437,500.

Slam Dunk! Michael Jordan’s #GameWorn, #Autographed Nike Air Jordan 1s sold in an online auction today for $560,000, setting a new world auction record for any pair of #sneakers – surpassing the previous auction record of $437,500 set at Sotheby’s in July 2019 by the Nike Waffle Racing Flat ‘Moon Shoe’. One of the most important basketball sneakers of all time made exclusively for the legendary NBA #ChicagoBulls player in 1985, the pair was sold to coincide with the final episode of the popular ESPN documentary ‘The Last Dance’, which spotlights the Chicago Bulls and Michael Jordan. 🏀 #SothebysAirJordans #MichaelJordan #TheLastDance #Nike #AirJordan #Jumpman

These rare Nike Air Jordan 1’s were expected to sell for $150,000. In fact, that was the ‘high estimate’ of the Sotheby’s auction. But sales of Michael Jordan memorabilia have surged 5,000% in the past month thanks to ESPN’s The Last Dance and that was no doubt a contributing factor here.

According to a press release from Sotheby’s Auction House, 70% of the bidders were new to Sotheby’s and ranged in age from 19 to 50. The value of these shoes surged $300,000 in the final 20 minutes of the auction.

NEW YORK, 17 May 2020 – Sotheby’s is pleased to announce that Michael Jordan’s Game Worn Autographed Nike Air Jordan 1s from 1985 sold for $560,000 this afternoon in an online auction – the new world auction record for any pair of sneakers, surpassing the previous record set at Sotheby’s for the Nike 1972 Nike Waffle Racing Flat ‘Moon Shoe’ sold for $437,500 in July 2019. Following a bidding war which drove the value up by $300,000 within the final twenty minutes of the sale, the pair achieved more than 3.5x their $150,000 high estimate. Bidders ranging from age 19 to 50+ participated across 4 continents, with 70% of bidders new to Sotheby’s. The pair was sold coinciding with the final episode of the popular ESPN documentary ‘The Last Dance’, spotlighting the Chicago Bulls and Michael Jordan’s legendary career.

The Vintage Originals from 1985 are in the Chicago Bulls white, black and red – the Air Jordan 1 colorway that Michael Jordan wore the most often on the court. In 1984, Nike gave Jordan a signature line of shoes and clothes – a crucial, unprecedented move to entice Michael Jordan to sign with Nike. Produced between February to April 1985, Jordan wore the present pair of Air Jordan 1s during an early, pivotal point of his career and thus catapulted the sneaker’s popularity.
The Jordan exclusive features unique variations from the public release of the sneaker: MJ’s are Mids, whereas Nike released only Highs and Lows to the public in 1985; the iconic Swooshes are longer, leaner, and more aggressive; and the pair is made from a different material and features red laces, varying from the public offering with only black and white laces.

That is one of the most iconic shoes ever created. For me, that’s perfection. The design and colors work perfectly and it launched the most successful athlete’s brand in history. So I fully understand why someone would drop $560,000 on these shoes. But I’m now wondering where all of his other game-worn shoes from that season are and why they haven’t been rushed to the auction block.

You can read the full press release right here on Sotheby’s website.