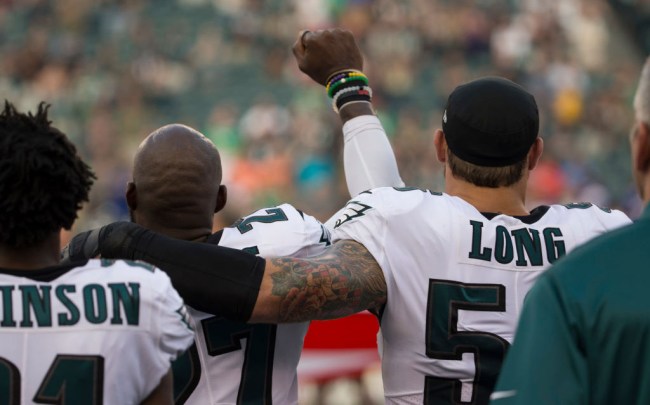 President Trump’s call for NFL owners to fire or suspend players that fail to stand for the national anthem, was met with a series of player statements on Sunday. Players across the league protesting racial injustice and police brutality; locked arms, took a knee or failed to come out entirely, for the singing of the national anthem. On Monday, Nike (NKE) became the first NFL sponsors to publicly side with the players, saying “Nike supports athletes and their right to freedom of expression on issues that are of great importance to our society.” Hyundai (HYMTF) followed that statement with one of their own saying “we stand for and respect individuals’ freedoms to express their First Amendment rights in any peaceful manner in which they choose. We also stand for inclusion, freedom and all that represents those values”. Bose wrapped up the day saying “we respect that freedom (to express your views), whether we agree with those views or not. The balance of the league’s sponsors have either remained quiet or taken a more “patriotic” position.

Howie Long-Short: The pro-Trump crowd is looking to force the league’s hand, calling for a boycott of the league’s sponsors. You can find the hashtags #BoycottNFLSponsors and #PunchThemInTheWallet on various social media platforms. Don’t expect the campaign to work. There has already been (and will continue to be) an outpouring of support for the players and their 1st amendment rights.

Fan Marino: Within the last week we’ve seen a devastating hurricane in PR, a deadly earthquake in Mexico, North Korea accuse the U.S. of waging war, the unveiling of new travel restrictions and leaked details of a tax reform package; but 45 is focused on the NFL. Frankly, the lack of compassion is offensive and his inability to focus on what’s important is detrimental to the American people. The leader of the free world should be paying attention to the big picture. The decision to stand (or not to) for a national anthem is simply irrelevant in the grand scheme.

HBO’S REAL SPORTS TO EXPLORE “GUARANTEE GAMES”, WHY THEY’RE PLAYED AND THE RISKS THEY POSE TO HBCU ATHLETES

Howie Long-Short: Bowl Subdivision schools are going to pay out $150 million in “guarantee” games, during the 2017 CFB season. No one wants to see kids get hurt, but football revenues support entire athletic departments. Understand that if you end these games, you are ending the athletic careers of thousands of student athletes. If HBCU schools can drop down a level and still make ends meet, they should look to do so in the best interest of their student athletes.

Fan Marino: The SEC conference is the only P5 conference to play an 8-game conference schedule. Some will argue that it provides them with necessary scheduling flexibility (several teams have yearly non-conference, rivalry games that need to be accommodated), but Commissioner Mike Slive has readily admitted the strength of the conference influenced the decision. As a result, SEC teams often play late season “guarantee” games (i.e. November 18th: Alabama hosts Mercer, USC hosts Wofford, Auburn hosts Louisiana Monroe). The elimination of “guarantee games” would force the conference to either play a 9-game conference schedule or to schedule an extra P5 opponent. Either way, CFB fans would win.

Comcast Spectacor, the sports and entertainment arm of Comcast Corporation (CMCSA), purchased the expansion rights to the Philadelphia franchise of the National Lacrosse League. The team will begin play in December 2018; with home games set to be played at the Wells Fargo (WFC) Center. A fan vote will determine the team name. The NLL has an OTT streaming service with 25,000 paying subscribers. The league’s Game of the Week, which airs on Twitter (TWTR), draws an average of 350,000 views.

Howie Long-Short: Comcast Spectacor, which owns the Philadelphia Flyers, is the 4th NHL owner to buy an NLL franchise. It’s a smart acquisition for several reasons. The league demographics are attractive, with a high percentage of college grads; meaning the team should be able to demand strong returns on advertising and sponsorship opportunities. The digital first business model aligns with Comcast’s broadband business; as the service becomes essential for OTT subscribers. Most importantly, the company’s strength is in hosting events and building businesses around pro sports teams; both on the merchandising and sponsorship side. It’s what they do.

Fan Marino: Historically speaking, Philadelphia has been supportive of box lacrosse. The Philadelphia Wings won 6 championships over 28 years in the city; with the team regularly bringing in crowds of 10,000+/game. I’m bullish on their ability to build a fan base, as I don’t believe they are starting from scratch.