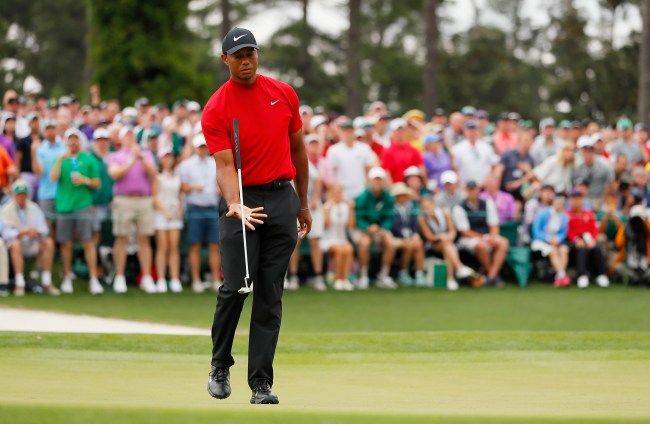 The phrase “He’s back” had taken on a self-satirizing tone before Tiger’s first championship win in over 10 years at Augusta National on Sunday. The 43-year-old captured his fifth Masters title and his 15th major tournament in a come-from-behind victory that was seen through nearly a quarter of all the televisions in America.

The ubiquitous exposure Tiger received for one of the greatest moments in modern sports also brings with it incredible value for Nike, his longtime sponsor.

The value of Woods’ Sunday victory for Nike is roughly $22,540,000, according to Apex Marketing. This number is equivalent to the brand value that the athletic apparel company received from Woods’ on-camera exposure during the Final Round of the Masters broadcast on CBS, the firm said. The iconic Nike swoosh was featured on Woods’ hat, shirt, pants and shoes.

By Sunday afternoon, Tiger Woods-branded apparel on the Nike website was completely sold out.

It should also be noted that Nike scored itself some major clout with its incredible ad immediately following its client’s victory. At the time of me writing this, the spot has garnered 320,000 likes and nearly 100,000 retweets.

Nike deserves the marketing shine seeing as the company never wavered in its support of Tiger, even after his career and public image looked futile in 2009 and his DUI arrest in 2017. Nike has been with Tiger since the legend’s golf debut in 1996 at the Greater Milwaukee Open, CNBC reports, signing him to a five-year $40 million contract at the time.

Nike wasn’t the only brand that piggybacked on Tiger’s monumental victory.