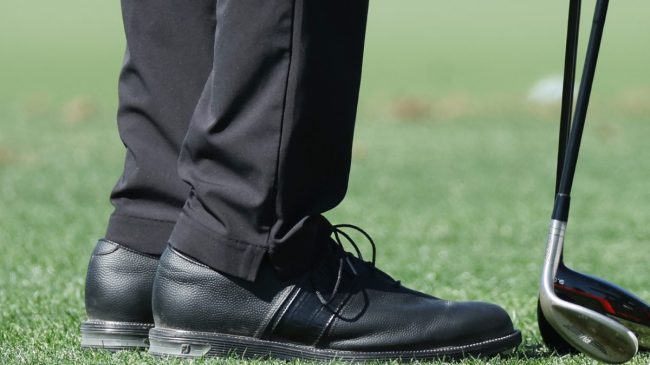 Tiger Woods has been the talk of this year’s Master’s event.

The veteran golf legend is hoping to make a comeback at Augusta National after being sidelined following a car accident early last year.

His status for the weekend is still up in the air, but everyone is hopeful to see him participate in golf’s premiere tournament. At this moment, Woods says he’ll be a “game-time decision.”

That accident forced him to miss last year’s event, but this course is one that Woods is very familiar with. The golfer has played in the field more than 20 times, winning the event on five occasions. That’s just one off the all-time mark set by Jack Nicklaus.

As speculation continues to grow regarding a return to the links, so too, do his odds of winning.

While most talks surround Woods’s status for next weekend, there was something else that caught the attention of viewers on Sunday.

During a practice round, the notable Nike rep was seen sporting FootJoy shoes rather than his typical ensemble.

Nike Responds With A Statement On Tiger Woods

The omission of Nike kicks caused quite the stir on social media as folks tried to get to the bottom of the debate. Was there some sort of rift between the golfer and his sponsor? The more likely answer is that the shoes provide more comfort, which is important following Woods’s rehabilitation from the car accident.

But people will continue to debate.

With questions being raised, Nike took a moment to responded with a statement.

“Like golf fans around the world, we are delighted to see Tiger back on the course… His story continues to transcend sports… As he continues his return, we will work with him to meet his new needs.”

The statement seems to hint that the relationship is still strong, which was further reflected by the Nike shirt that Woods sported on Sunday. We’ll see if this has any effect on Woods’s attire moving forward.