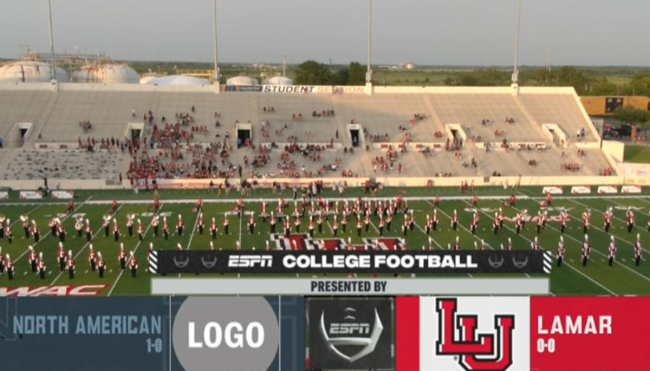 Over the weekend, the football world was treated to possibly the weirdest saga it’s encountered since learning about the nonexistence of Manti Te’o’s girlfriend courtesy of Bishop Sycamore, the high school team that was tapped to face off against IMG Academy on ESPN last week.

It didn’t take long for viewers (and ESPN’s own announcers) to realize something was amiss after the wildly overmatched squad made a mockery of the sport. However, things took an even stranger turn after people started taking a closer look at a high school that might not even exist and discovered a history of check fraud, players with active arrest warrants, and a coach who allegedly had the team warm-up for practice by beating up a homeless man.

When you take all of that into consideration, it’d be pretty hard for any football team to top Bishop Sycamore in the “There’s No Way This Is Real, Right?” Department? However, another school has thrown its hat into the ring in the form of North American University.

NAU’s college football team faced off against Lamar University on Thursday night in a contest that was streamed on ESPN+ and initially came to the internet’s attention after astute viewers noticed The Worldwide Leader had seemingly been unable to track down the logo for the Houston-based squad.

#WAC football is back! Highly anticipated match up with ⚪LOGO⚪ pic.twitter.com/Ty2X5nkCBD

As was the case with Bishop Sycamore, it quickly became very evident North American University had no real business being on a college football field. Need proof? I would direct you to a couple of clips from a game they would ultimately lose by a score of 47-3 that were documented for posterity by internet historian Timothy Burke.

they are.. not good at football pic.twitter.com/aw8P7Gpja7

1st and 23 for North American. can they get a few yards or… pic.twitter.com/UV4dt2hWb8

Burke also took the time to dig into the school’s background and unearthed some pretty fascinating details after discovering NAU lied about the program being sanctioned by the NAIA. It would appear someone at Lamar failed to realize North American University recently landed on an NCAA blacklist that made the game virtually meaningless, but that twist had nothing on the revelation that the school’s president was once placed on Turkey’s Most Wanted list in connection to terrorism accusations.

"Tekalan was recently appointed the president of North American University, according to a Dec. 19 statement.

Tekalan is on the Turkish Interior Ministry’s Most Wanted terrorists list, with a reward of 750,000 liras for information leading to his capture" https://t.co/P44oGZuik1

It’s worth noting this wasn’t a repeat of the Bishop Sycamore situation, as ESPN had no say in the school Lamar decided to play.

There are a lot of people questioning ESPN on this; ESPN did not choose this opponent. Lamar did, and ESPN is contractually obligated to air the game no matter who they played: https://t.co/9Oa02mgrsy

However, it’s hard to imagine they’ll be featured again at any point in the near future.