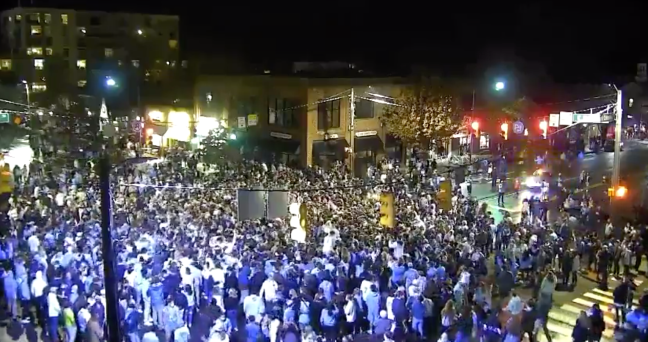 Hundreds (some masked, some not) flooding Franklin Street after UNC’s win over Duke tonight. For @nandosports pic.twitter.com/qnyHo5FOEa

Chancellor Kevin Guskiewicz said prior to the game that any form of mass gathering would have consequences amidst the COVID-19 pandemic. He addressed the celebration on Twitter.

I know many Tar Heels enjoy rushing Franklin Street to celebrate a big win, but we are in the middle of a global pandemic, and COVID doesn’t take a break for the Duke game. We will investigate this incident and work with local authorities to pursue consequences.

Neither team was ranked in the game for the first time in 61 years and the Blue Devils will face a significant uphill battle to make the NCAA Tournament with the loss. The Tar Heels have their at-large bid hopes alive, but they’re hanging on by a thread. As an Ole Miss fan, I can tell you from experience that rivalry matchups are often the most meaningful when the respective teams are in a down year. Students are on-campus and unable to participate in a traditional college experience, which makes events like this an even more likely to occur.

Some of the scenes that came out of Franklin were pretty wild— down to jumping flaming mattresses.

As could’ve been expected, students did not heed North Carolina’s plea to NOT rush Franklin Street pending a Tar Heels victory versus the Blue Devils tonight.

Someone has started a fire pic.twitter.com/L2gJL7JnVX

University officials encouraged students NOT to gather because of the ongoing pandemic. @WRAL #wral pic.twitter.com/1QQ3UmxEDm

The police eventually rolled up and shut things down. There have not been any reports of any arrests or injuries.

As of Friday, February 5, the UNC coronavirus dashboard reports 610 total COVID-19 cases associated with the university thus far in 2021. The school had 10 reported cases on Feb. 4 and nine were students.

On the court, the Tar Heels will continue their season on the court with an eight-game string of ACC matchups that concludes with a rematch against the Blue Devils on March 6. If both schools fates aren’t decided before then, that game could determine which team gets to dance. While it might be too late for Coach Mike Krzyzewski’s team to reach March Madness, Roy Williams’ squad could finish strong and make it on the “in” side of the bubble.