An Amazing 61-Year Streak Between Duke, North Carolina Basketball Will End On Saturday 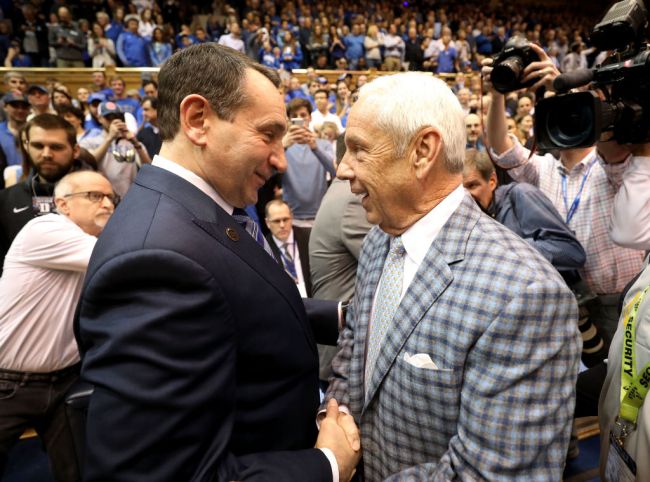 Ohio State/Michigan, Yankees/Red Sox, Lakers/Celtics, Bears/Packers. Of all the greatest rivalries in sports, Duke and North Carolina basketball ranks near the top, but the stakes are a little bit different this year.

When the Blue Devils host the Tarheels on Saturday, it will be a perfect representation of a most unusual season. The Cameron Crazies will be absent from an empty arena as two teams that have been hindered so greatly by COVID-19 take the court with six losses apiece. Neither school has played well and their respective records will result in the snap of a 61-year streak.

There have been 153 consecutive games played between the two with a top-25 team involved, but that will not be the case for the 154th meeting. This weekend’s matchup will be the first time that neither Duke nor North Carolina are ranked in the AP Poll since Feb. 27, 1960. Tarheels head coach Roy Williams was nine years old, and his counterpart Mike Krzyzewski was 13.

For the first time since 1960, the long time rivals Duke and North Carolina will enter this Saturday’s game both as unranked teams.

Both programs began the year in the top 20 of the preseason poll, but the unusual circumstances of the 2020-21 season have taken their toll on teams that are highly-reliant on freshman. Because of the pandemic, freshman did not arrive on campus as early as they would have, they received little-to-no offseason training, and condensed schedules didn’t allow for time to adjust to the next level.

To compare, Duke’s top four scorers are freshmen and four of North Carolina’s top six scorers are freshmen. Neither program has fared well to this point. On the other side, top-ranked Gonzaga and second-ranked Baylor have at least six of their top seven scorers who are non-freshmen.

Despite their four-less wins, the Blue Devils are slight favorites to win the game, but it is set to be a four-quarter battle between two struggling blue bloods. Neither team is out of the March Madness conversation just yet, but a loss on Saturday would be a crushing blow to their already poor résumés, making the rivalry bout more important than ever in some ways.