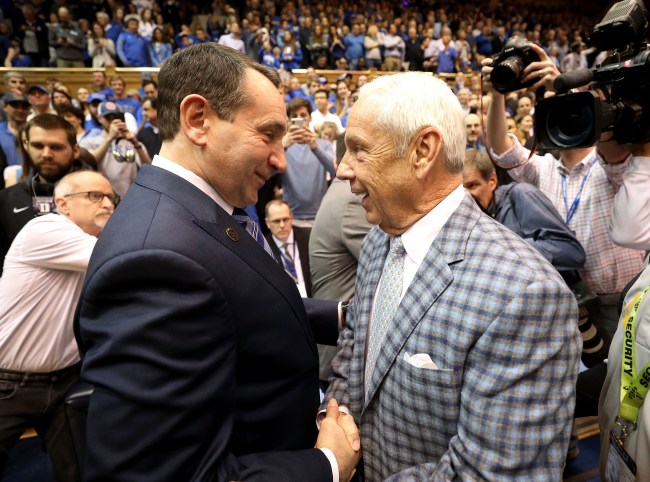 The North Carolina-Duke rivalry is one of the fiercest, if not the fiercest, in all of college basketball, with the two elite programs separated by a mere nine miles. With some of the biggest names to ever suit up in the sport — including guys like Michael Jordan, Grant Hill, Vince Carter and Christian Laettner, among others — when the two teams get together, it’s always must-see TV, as anything can happen.

With the rivalry beginning all the way back in 1920, Nike decided to commemorate the first meeting between North Carolina and Duke with throwback uniforms that pay homage to that contest. Take a look below at what the Swoosh decided to come up with.

Yep, those are the actual uniforms that will be worn during Saturday’s North Carolina-Duke rivalry game. Is it just me, or do they look like pinnies that middle school kids wear when playing a game of dodgeball or something. My goodness, Nike couldn’t do any better than this? Really? Who actually signed off on those things?

To help understand the thought process behind the uniforms, here’s the statement from Nike describing the design — or lack thereof.

“The body is covered in the programs’ respective tones of heathered blue. The front of the jerseys are characterized by the program logo and are absent of numbers, mirroring the teams’ 1920 look. On the inside bottom hem of the jerseys are the Roman numerals MCMXX-MMXX, which translates to 1920-2020. A gold jock tag and gold ELITE tag on the neck signifies a special distinction: programs that have won at least one national championship as a Nike school.”

Uh, OK then. It’s cool to commemorate something as big as the North Carolina-Duke rivalry, but were these boring uniforms really the only options? I’m seriously at a loss for words.

I’m also not alone in my hatred for the boring jerseys, as people on Twitter couldn’t help but rip these things to shreds, with people wondering how much thought and effort Nike actually put into designing these things. Take a look below at some of the comments from social media.

Creatives: "Let's do something incredibly simple and minimalistic. Let's strip these teams from the frills and burdens of modern aesthetic and reveal the brands in their truest form."

Teams: "So like just put the logos on the chest?"

Creatives: "My God. Brilliant. That's it."

This is my 4th grade rec teams jerseys! Was wondering where they went.

Didn’t know this was a preseason scrimmage

As some people said above, these look like practice jerseys of a local high school team, not the uniforms that should be worn during the North Carolina-Duke rivalry game, which is one of the most epic in college hoops history. No joke, players from both teams should boycott this garbage and just decide to play shirts vs. skins.