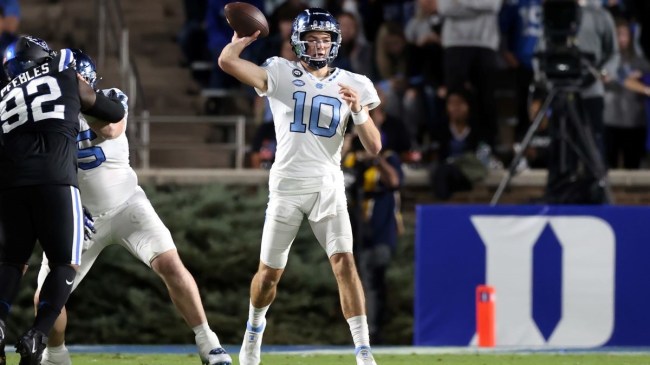 If you’re a Division I FBS football program in the state of North Carolina this season, you’re probably having a pretty good time. Sure, none of the Tar Heel state’s FBS teams are ranked in the top 10. But they all range somewhere between good and very good.

Just how good have the programs been? Well, consider this fact.

Duke, North Carolina, NC State and Wake Forest are expected to play in a bowl game in the same season for the first time ever.

According to ACC Network producer Bryan Ives, it’s the first time in history that each of Duke, North Carolina, North Carolina State and Wake Forest are all bowl eligible.

The Blue Devils moved to 6-3 with a 38-31 victory over Boston College on Friday night. The win and bowl eligibility cement what has been a remarkable first year for new head coach Mike Elko.

Meanwhile, North Carolina is ranked No. 17 in the country and is well on the way to another victory. The Tar Heels lead Virginia 31-21 late in the fourth quarter. Elsewhere in the research triangle, 22nd-ranked North Carolina State plays host to 21st-ranked Wake Forest in a top-25 showdown on Saturday night.

But the state’s success reaches beyond even the bounds of the ACC. Appalachian State holds a 5-4 record and looks likely to be bowl-eligible yet again. The Mountaineers picked up a program-defining win over Texas A&M earlier in the season and played host to ESPN College GameDay.

While down on the coast, Eastern Carolina boasts a 6-3 record and is likely headed bowling as well.

The vibes down in the research triangle and beyond are clearly very, very good. And it appears the basketball schools may have something to brag about on the football field as well.