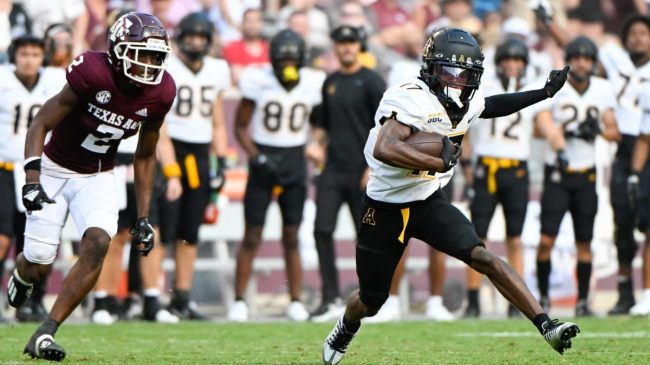 College Gameday made a bit of history on Saturday when it rolled into Boone, North Carolina for a first-ever trip to Appalachian State University.

The Mountaineers are riding high after an historic upset last week over then sixth-ranked Texas A&M. The win came after Texas A&M students trashed App State at their traditional midnight yell prior to the game. That video circulated across the internet this week and made for some embarrassing moments for Aggie grads.

Appalachian State coaches went to extensive measures this week to keep their players focused on Saturday’s game with Troy. But students are still living it up in the wake of the victory over Texas A&M.

Perhaps the most embarrassing part of Texas A&M’s loss to the Mountaineers is what they paid to make it happen.

Power Five schools often pay to have smaller schools come to get bet up in early season non-conference games. But App State isn’t just some random small school. The Mountaineers made their name with a massive 2007 upset of the Michigan Wolverines in the big house.

Appalachian State almost did it again in 2018 when it took Penn State to the wire in Beaver Stadium. This is just what the Mountaineers do.

But even with all that information at hand, Texas A&M paid Appalachian State a reported $1.5 for the week two contest. One Mountaineers fan, in particular, didn’t forget. And he was sure to thank the Aggies for their generosity.

This is automatically in the Game Day sign Hall of Fame #AppState https://t.co/wjHWk3gjkD

How good was the sign? So good that College Gameday gave the creator and two others free tuition for a year.

Free tuition for not ONE best sign … but instead ALL THREE 👏 pic.twitter.com/Vxs318ZCa5

Texas A&M, meanwhile, is the gift that just keeps on giving.