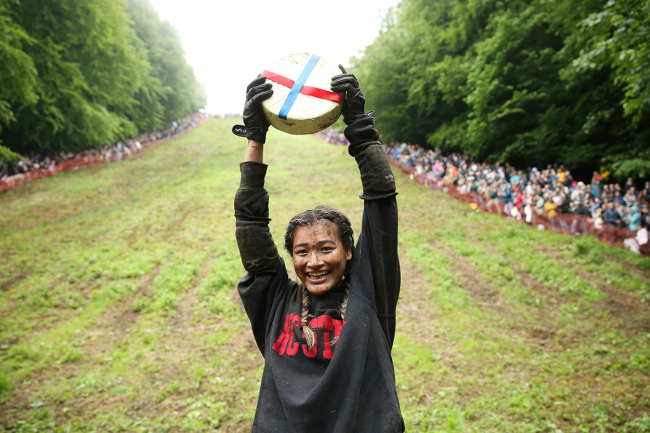 After two years without one of the most unique (and brutal) events in the world, the Gloucester Cheese Roll returned over the weekend. And the wheel is coming back to the United States!

During the annual Cheese Roll, participants race down the 200-yard-long Cooper’s Hill in Brockworth, England— one of the steepest hills in the country. The goal is to not only be the first down the hill, but the first to get your hands on a round of Double Gloucester cheese that is rolled down the hill at the start of the race.

It is around 600 years old as an event and it is absolutely brutal.

The cheese, which weighs seven to nine pounds, can reach speeds up to 70 miles per hour. Meanwhile, the competitors flip, flop, roll and run down the hill behind it.

Because of the steepness of the hill, coupled with a desire to be first down the hill, competitors are often injured. This year, in 2022, there were at least a dozen injuries, including a broken leg.

Multiple heats are held throughout the day with separate events for men and women. This year, it was an American who won it all on the women’s side.

And she only graduated college less than a month ago.

Abby Lampe, an Industrial and Systems Engineering major at North Carolina State, absolutely dominated the competition. She also took quite the beating, but it paid off with a historic win.

Abby Lampe, who is spending the summer in Spain, figured that this would be her only opportunity to participate in the Cheese Roll and she ended up winning.

Throughout her tumble down the hill, she took multiple hits that were absolutely vicious. they very easily could have knocked her out, but she never lost conciousness.

no! i didnt lose consciousness hahahaha

In fact, she didn’t even suffer any major injuries. Just a few bumps and bruises, surely.

“I took a lot of tumbles but I’m feeling good. Did I lose any teeth?” Lampe said to itv. “I was worried I was going to lose my teeth or break an ankle, so all good. I can’t believe I won!”

The smile on Lampe’s face was absolutely priceless. She is bringing a Cheese Roll world championship back to Raleigh and somebody needs to get her an NIL deal!

On the men’s side, Chris Anderson from Brockworth won his 23rd Cheese Roll, but he vowed to retire as a legend after 2022. Here is another look at the event: