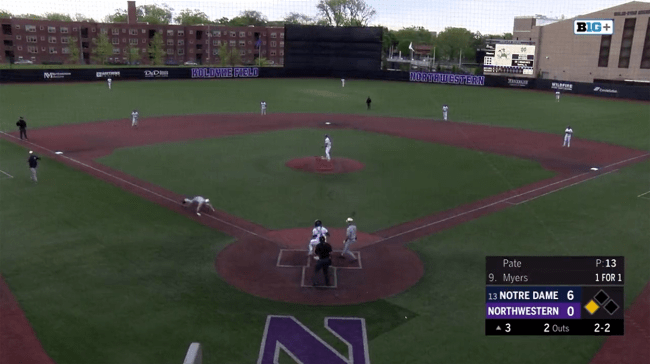 Notre Dame baseball put a beatdown on Northwestern on Tuesday night. The Fighting Irish run-ruled the Wildcats in Evanston, beating them 14-4 in only seven innings.

As things currently stand, Notre Dame is 32-11 in 2022 and will be all-but guaranteed the opportunity to host an NCAA Regional in South Bend. A large part of the Irish’s success comes from junior utilityman Jack Brannigan.

That was the case on Tuesday when he scored a run in one of the most bizarre ways possible.

During the top of the third inning, Notre Dame already held a 6-0 lead. With two outs, a 2-2 count and Brannigan on third, the Northwestern pitcher was taking his time getting set on the mound.

Reacting to the slow pace of play, Brannigan took off toward home plate and tried to steal a run. But he tripped almost immediately after getting his jump and fell to the ground.

Despite the fact that Brannigan was caught in no-man’s land on all fours, the Wildcats pitcher chose not to throw to the dish right away. In turn, Brannigan continued to make his way down the third base line and literally crawled the rest of the way.

The pitcher eventually threw down to his catcher but it was too late and, somehow, despite flopping across the plate, Brannigan scored.

Why did the Northwestern pitcher choose to hold the ball so long? Who knows, but it made for one of the most bizarre runs scored in baseball history.

It was the third time that Brannigan has stolen home in his career. Probably the first time he stole home while crawling.