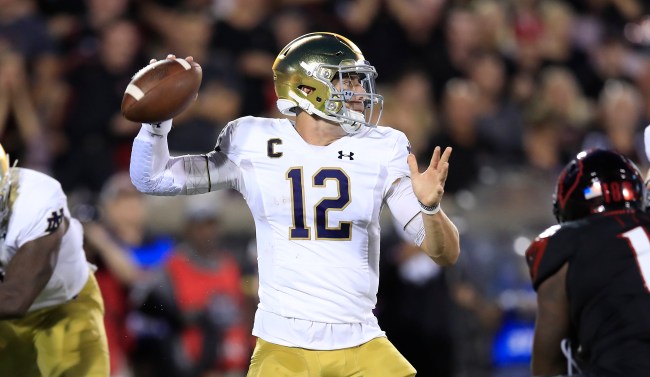 Notre Dame football suffered a coronavirus outbreak last week forcing the Fighting Irish to postpone its game against Wake Forest. The team announced that it had a total of 39 players in isolation or quarantine on Monday and head coach Brian Kelly explained that team doctors have determined two situations that led to the rapid spread of the virus.

The first misstep was simple, the team decided to have a normal pregame meal in which they all ate together, but Kelly explained that this led the virus to ‘spread like wildfire.’

“Throughout our entire time together, we had not had one meal where we sat down together,” Kelly said according to the New York Post. “Everything was grab and go. We get into our game situation where we have pregame meal together, and that cost us. Big. We had somebody who was asymptomatic, and it spread like wildfire throughout our meeting area where we were eating and then it got guys in contact tracing.”

The second misstep actually occurred during Notre Dame’s 52-0 win over South Florida on Sept. 19. A player vomited during the game, which the team thought was a result of dehydration, but he later tested positive for the virus.

“In trying to discern the difference between somebody who may be dehydrated in a game and having the effects of COVID on the sideline, [it] becomes very tricky,” Kelly said. “Just being vigilant and understanding that this thing can hide in so many different areas make it a tricky proposition, even if you’re doing all of the right things.”

A total of 25 players have tested positive while another 14 are being quarantined due to contact tracing.

While it’s an unfortunate situation, Notre Dame, fortunately, does not have a game this weekend with their next scheduled contest coming at home against Florida State on Oct. 10.