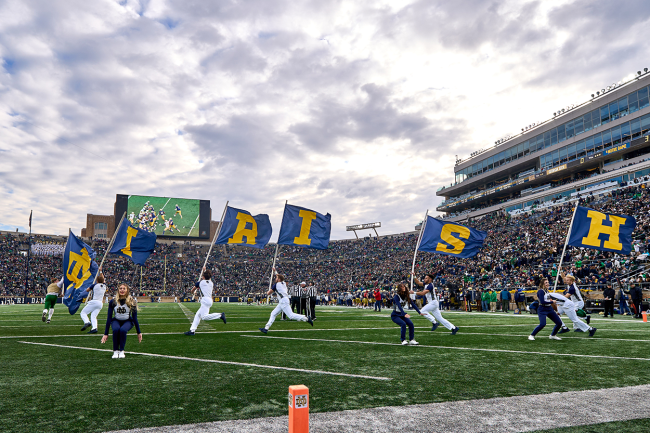 College football recruiting has changed drastically over the last few years. Not only does NIL play a role as of last July, but social media has become a massive component of the equation.

Every school around the country is competing in a content arms race to produce the coolest content possible for their recruits. Whether it be Lane Kiffin taking photos with recruits in his Porsche and Aston Martin, Brian Kelly dancing the Griddy, Dabo Swinney sitting on quarterbacks’ laps, holding photoshoots in G-Wagons at Tennessee, or USC taking their media game up a notch with a Hollywood twist, media is a big emphasis.

At Notre Dame, recruits are taking some of the coolest photos in the game. Four-star tight end Eli Raridon committed to play for the Fighting Irish in the Class of 2022.

He recently shared a TikTok from his visit to South Bend and it’s awesome.

Raridon brought a few of his friends over to Indiana with him from Iowa and they got to put on the pads while there and take some very baller shots.

Raridon shared a photo from his visit on Twitter and it was very cool. Taking in an old building on campus with the very Notre Dame, very Catholic stained glass in the background, it goes hard. Especially with the classic Irish uniforms.

However, Raridon’s TikTok shared some photos that his friends took on his visit and they go CRAZY. They are the most unique recruiting photos out there and they are straight flames. Take a look:

With the old brick building, and the stained glass and bible verse in the background it is the classic Notre Dame feel. The Irish deserve some major credit for doing exactly what they should be doing — selling the old school for what it is but sprinkling in just a dash of new school. Epic.