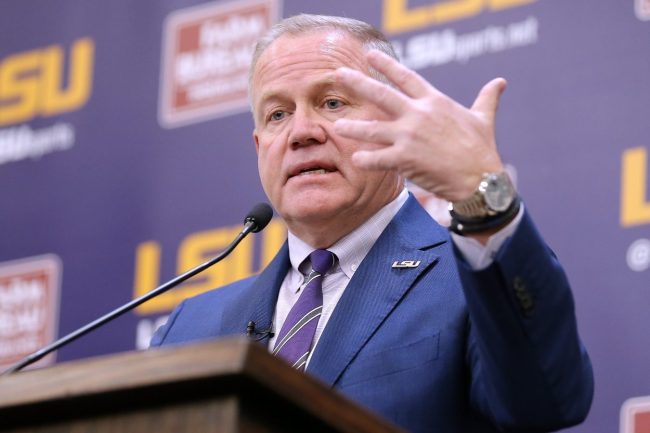 Brian Kelly has been the head coach at LSU since November 29th and the last nine weeks have been chaotic. The 60-year-old Massachusetts-native arrived in Baton Rouge after leaving Notre Dame in a hurry and immediately burst onto the scene with a fake southern accent.

Ever since his arrival, Kelly cannot saying the word “family,” and he keeps making very cringeworthy dance videos with recruits.

The first video came after the Tigers received a commitment from five-star quarterback Walker Howard. Kelly and his signal-caller got in a 360-degree video both and awkwardly danced to Garth Brooks.

Not long thereafter, Kelly spoke about the viral video. He said something along the lines of “if your five-star QB asks you to dance, you dance” and denied his fake southern accent with an incorrect statement about Bostonians.

On Friday, another new, just as uncomfortable video went viral. This is the last week of the open recruiting period and LSU has hosted quite a few recruits on campus this weekend.

Among them was three-star tight end prospect Danny Lewis Jr. He and Kelly got back in the booth and danced in slow-motion.

Kelly did not leave any room for Jesus and violated middle school dance protocol by grinding three inches behind his tight end target. It is very uncomfortable and Lane Kiffin roasted him for the video.

On Saturday, Kelly was at it again.

Although Kelly was not grinding on 17-year-olds this time, it was not that much better.

After Jamaar Chase and Justin Jefferson brought the ‘Griddy’ to the mainstream while in Baton Rouge, it has become the signature dance of LSU. Obviously, it has gone international, but it began in The Boot.

Allen ‘Griddy’ Davis was the first to do the dance. The Tigers brought him to campus over the weekend to chop it up with the recruits and shoot all kinds of videos.

At some point during the visit, Davis tried to show Kelly how to do the dance. It did not go well.

Now, Kelly deserves some credit here. This video is not nearly as cringeworthy as the first two and he is really trying— even if he is trying a little bit too hard.

When the creator of a dance offers to teach you how to do it, you’re not going to say no. And in some ways, the only way to embrace New Orleans and Louisiana culture is by diving in head-first— even if it is to your detriment, which it has been for Kelly thus far.

This Griddy video would actually be kind of cool, but the first two videos and the events that transpired upon Kelly’s arrival make it not so much.

But with that being said, maybe Kelly should stop filming dance videos. It certainly has not gone in his favor thus far.