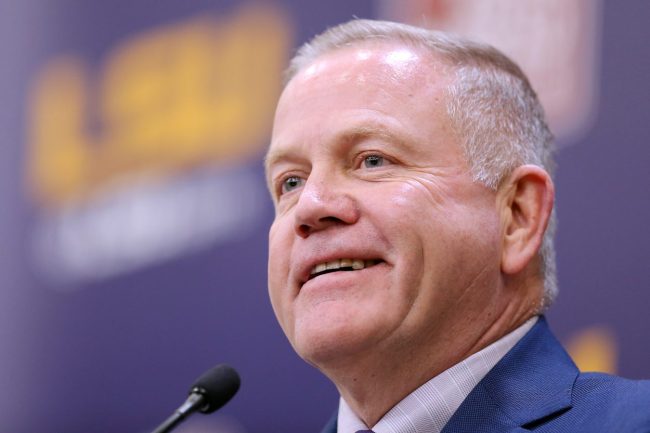 The Brian Kelly era at Louisiana State University got off to a very bizarre start. Not only did it seem like the school panicked after missing out on hiring Lincoln Riley and gave Kelly a bag instead, but Kelly managed to upset everybody at Notre Dame on his way out.

And then, upon arriving in Baton Rouge, he bizarrely broke out a fake southern accent in his first public speaking appearance. Since then, he has been the butt of quite a few jokes and cannot stop saying the word “family” with three syllables.

During Tuesday’s Texas Bowl, the Tigers faced the Kansas State Wildcats in the last bowl game of the year. Kelly, in the midst of taking over his new program, did not coach the team. He was in a box instead while interim head coach Brad Davis made history.

Prior to halftime, Kelly joined the ESPN broadcast team in the booth to discuss a variety of topics. Among the talking points was Kelly’s weird celebratory dance after landing a five-star quarterback recruit, to which he said something along the lines of “if you land a five-star QB recruit, then you do what he asks.” Fair.

Another topic of discussion was Kelly’s fake southern accent. To answer to his false persona, Kelly said something that is just objectively wrong.

He said that Bostonians like himself don’t have a strong accent.

"I'm from Boston. We don't have strong accents" pic.twitter.com/xdliZBnWWa

That is simply not true. In fact, among the most recognizable accents are the Bostonians.

With all of that being said, Kelly is likely trying sarcasm here and simply cannot deliver, which may be worse. Either way, he has a complete lack of interpersonal communication skills. How he recruited anyone ever is a mystery.

And Bostonians do have accents.

Just listen to this:

What on earth is Brian Kelly talking about?! He must be from a different Boston than the one we all know.