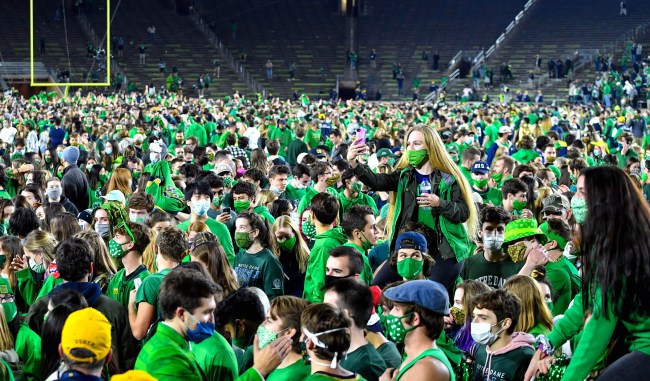 After fourth ranked Notre Dame completed its 47-40 upset win over top ranked Clemson in two overtimes Saturday night, it appeared that all 11,011 fans that were in attendance at Notre Dame Stadium rushed the field.

Considering this occurred in the middle of a pandemic and the same day the United States set a record for most COVID-19 cases at over 116,000 (since surpassed – twice), people were not happy about it.

Among those people were Notre Dame president Rev. John. I. Jenkins, who himself contracted coronavirus at one point, and sent out a stern letter to Notre Dame students on Sunday night which stated the university would be instituting a zero-tolerance policy for any students who fail to comply with their testing policy.

On the plus side, before the game, ESPN reports Notre Dame head coach Brian Kelly looked to be prophetic when he told his players, “I just want you to know, when we win this thing, the fans are going to storm the field.”

After the game, Kelly addressed the situation, “With COVID being as it is, we’ve got to get off the field and get to the tunnel. Now I beat ’em all to the tunnel. So that didn’t go over so good, but they reminded me that I did tell them that, so my skills of prognostication were pretty good today.”

Notre Dame quarterback Ian Book told Scott Van Pelt on ESPN Monday night, “Once I saw how many people were starting to come on the field, I had to get out of there and try to grab a couple of my teammates and go celebrate in the locker room together.”

Fast forward to Wednesday and coach Kelly informed Mike Greenberg on his radio show, “We had a very celebratory ending to our game. And we certainly, you know, needed to know that we were going to be good. We’ve had two tests; we passed all of our testing on Sunday and again on Tuesday, so that’s a really good sign. But we’ll test again Thursday and we’ll test on Friday. So, you know, that’s always hanging over you.”

Kelly added, “It was the senior’s last game, because you know, class is out next week. We started early here because of COVID and we finish next week. So, you have the entire student body, who have gone through what we’ve just talked about, it’s their last game. You know they’re so excited about the victory.

“Look, I mean, it was a very difficult situation to keep them from getting on the field. We don’t have the support staff and people because of COVID out there. We tried to keep Clemson safe, which we did. We tried to do the best we could in the circumstances. We’re just glad everybody is safe right now.”

Notre Dame, now ranked number two in the nation, takes on Boston College Saturday at 2:30 p.m. ET. If the 5-3 Eagles somehow manage to pull off another upset at least there won’t be any fans in attendance at Alumni Stadium to make everyone nervous.