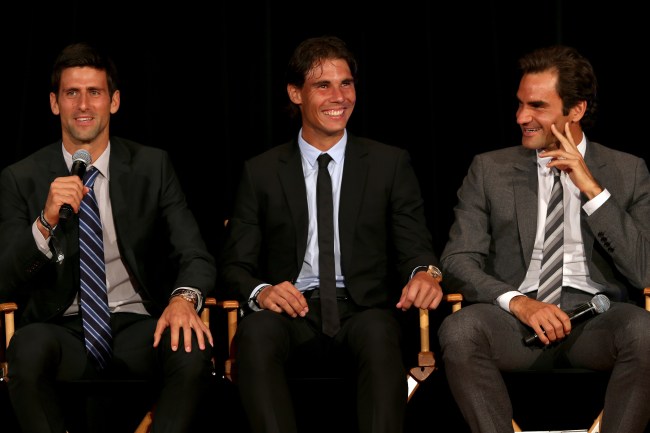 Roger Federer, Rafael Nadal, and Novak Djokovic aren’t just three of the best tennis players in the world over the past few decades, they are three of the greatest professional tennis players in the history of the entire sport. Djokovic is currently ranked #1 in the world (9,720 points) followed closely by Rafael Nadal (9,395 points), and Roger Federer is ranked third (7,130 points).

Djokovic has 78 career titles which puts him 5th on the all-time Open Era list. He’s won the Australian Open 8 times, French Open once, has 5 Wimbledon titles, and three US Open titles. I could continue here listing out the accomplishments of Roger Federer (the G.O.A.T.) and Rafael Nadal but that would take up the entire article when really you’re here because you were curious about their secret group chat.

In an interview with Dubai Eye 103.8 Sport, Novak Djokovic was asked to confirm the existence of a ‘Big 3’ WhatsApp group chat between Novak, Nadal, and Federer. I won’t keep you in suspense: it exists. And according to Novak’s comments, they’re all equally active on the hotline.

His comments about the group chat come towards the very end of this interview, around the 5:35 mark. I’ve set the YouTube video to start then but if it starts at the beginning for whatever reason you can scroll ahead to that time stamp (via Baseline):

Confirmation from @DjokerNole that he is part of the WhatsApp group we ALL wish we were in on!

Watch the full interview with the World No1 here ahead of his @DDFTennis return: https://t.co/R1QFmHlrOc@NovakFanClub @TennisTV pic.twitter.com/kYQjbdcF8U