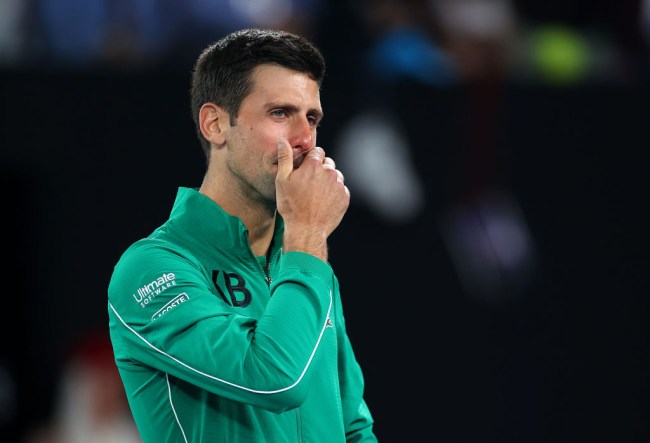 Tennis star Novak Djokovic believes that we should all do our best to live in the moment. To him, this can be a more powerful practice than most of us believe, as he insists that through gratitude and prayer, you won’t just live a happier life but you will also be able to magically make polluted water drinkable.

The “Joker” (as his fans like to call him) rarely seems to joke around about his, um, interesting ideas on health and medicine. While sports leagues were deciding how to handle a return without the discovery of a vaccine, Djokovic made sure his opinions were heard by revealing he fundamentally disagrees with the concept of inoculation and is unsure if he will return to the sport if he has to get a shot.

While Djokovic chugs his poisonous water and walks the streets with smallpox, tennis continues to work hard on determining how to get back into action while promoting the safety of players and fans. As of right now, the US Open is scheduled to start on August 31st, and while the USTA won’t make a final decision until the end of the month, it’s currently planning to only allow athletes to be accompanied by one other person (among other rules).

However, stars like Djokovic often travel with a large entourage including coaches and trainers, and according to the BBC, he is decidedly not a fan of this proposal based on what he told a news outlet in Serbia:

“We would not have access to Manhattan, we would have to sleep in hotels at the airport, to be tested twice or three times per week. Also, we could bring one person to the club which is really impossible.

I mean, you need your coach, then a fitness trainer, then a physiotherapist. The rules that they told us that we would have to respect to be there, to play at all, they are extreme.”

Not all tennis players are worth hundreds of millions of dollars and some will happily follow any rules that will allow them to compete again—including Dan Evans, the top player in Britain, who had this to say while chatting with the BBC:

“”There has to be a bit of give and take from the players. I don’t think having one person of your team only allowed is such a big deal. The majority of the draw would only travel with one coach.

Not everyone’s travelling with physios and fitness trainers like Novak said, so I think his argument there is not really valid for the rest of the draw, apart from the real top guys.”

At this point in time, it seems like safety should be the focus as opposed to trying not to hurt the feelings of players and it’s likely those who aren’t ranked number one in the world will echo Evans’ sentiment. However, if enough people come out in support of his views, Djokovic—who just so happens to be the president of the ATP Player Council—may end up getting his way.