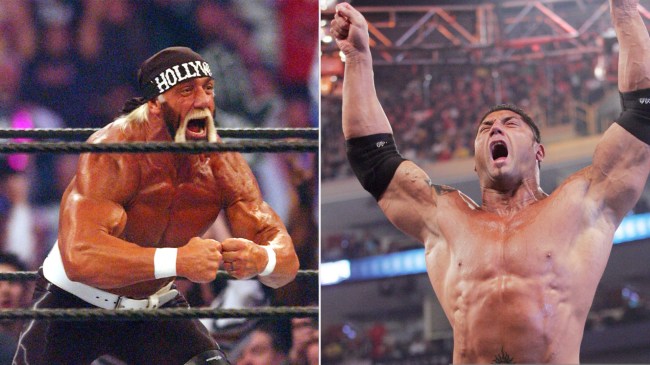 WWE announced on Monday that the nWo (New World Order), including members Hulk Hogan, Kevin Nash, Scott Hall and Sean Waltman, and Batista (Dave Bautista) will be inducted into the Hall of Fame at WrestleMania 36 in April 2020.

This move means that Hogan, Hall, Nash and Waltman will all become two-time WWE Hall of Famers, joining Ric Flair, Shawn Michaels, Booker T, and Bret Hart as the only wrestlers two receive two WWE Hall of Fame rings. Waltman was inducted in 2019 for being a member of D-Generation X.

When the nWo took over WCW in 1996 it began the high point for professional wrestling, fully kicking the Monday Night Wars into overdrive between WCW and WWE – a war Vince McMahon ended up winning.

“You’ve got four guys that were basically going at Vince as a shoot, pushing hard to actually try to take over,” Hogan told ESPN. “Not put him out of business but basically take his spot and be the No. 1 company. All of a sudden, you’re inducting four guys in the Hall of Fame that 20 years ago were trying to stab you in the back. It’s like Vince says: In the WWE, never say never.”

Bautista, AKA Batista in WWE, will also be inducted on April 2 at Amalie Arena in Tampa and spoke to People about the honor, saying, “Vince [McMahon] called me personally to ask me, I was just … I wasn’t surprised, but I was pretty happy. It’s a good feeling, it’s a really great feeling.”

The Guardians of the Galaxy actor also added, “As soon as I hung up the phone, I was … and excuse my language, I was like, ‘Sh*t, I gotta give a speech.'”

Reactions from WWE fans to the two announcements were mostly positive, but many questioned why the nWo honor is only going to those four men when more than 60 different wrestlers were members of the group over its run.

Nash, Hall and Hogan were technically the three founding members of the faction. Waltman was actually the seventh wrestler to join, following Ted DiBiase, The Giant (now The Big Show), and nWo Sting (Jeff Farmer).

The biggest complaint, however, is the omission of the man who put the nWo together behind the scenes and then became one of the main faces of the group, Eric Bischoff.

My only complaint about the nwo going in is that @EBischoff isn't going in with them. There would be no nwo without Eazy E. #JusticeForBischoff https://t.co/a7vEtm7EwM

Many fans were also not pleased that despite his being kicked out of the WWE Hall of Fame (then reinstated) for his racist comments, Hulk Hogan is being honored, again.

STOP PUTTING HOGAN IN THE HOF!! 🙈🙈

Congrats to the NWO on their WWE Hall of Fame Induction pic.twitter.com/B5QBIfwFLL

Some wrestling fans also weren’t particularly pleased to see Waltman become one of just seven two-time WWE Hall of Famers based on his recent history.

Smh. Xpac, the meth head and domestic abuser is now a 2 time HOFer while Ivan Koloff and Demolition still aren't in. What a joke.

Meanwhile, why isn’t Cyndi Lauper in the WWE Hall of Fame yet?

batista needs to wear this when he gets inducted into the HOF pic.twitter.com/k5neyIPHQm