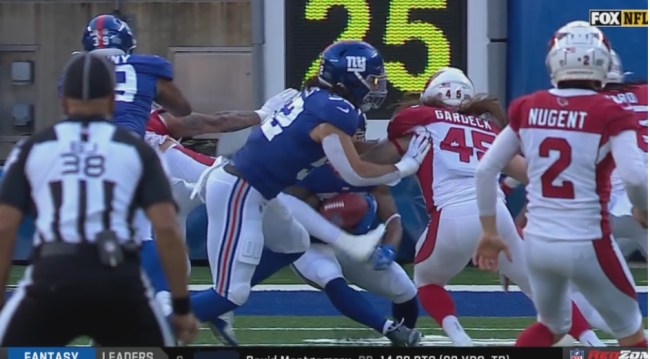 The Arizona Cardinals forced a fumble in a unique way which may have confused the refs on the field.

Kylie Fitts with a forced fumble on the kick. https://t.co/hJM5oNY2Qp pic.twitter.com/xvC6UwMFT1

According to Fox Sports rules expert Dean Blandino, the fumble should not have counted because players aren’t allowed to intentionally kick the ball loose.

This Dion Lewis fumble shouldn’t have counted, per Fox’s Dean Blandino. Not allowed to kick the ball loose intentionally: pic.twitter.com/KKOmYfiTVv

The fumble ended up costing the Giants as the Cardinals were able to score a touchdown a few plays later to extend their lead 13-0 before halftime.

Kyler Murray extends the #Cardinals lead with a touchdown to Dan Arnold.pic.twitter.com/0m69APnefA