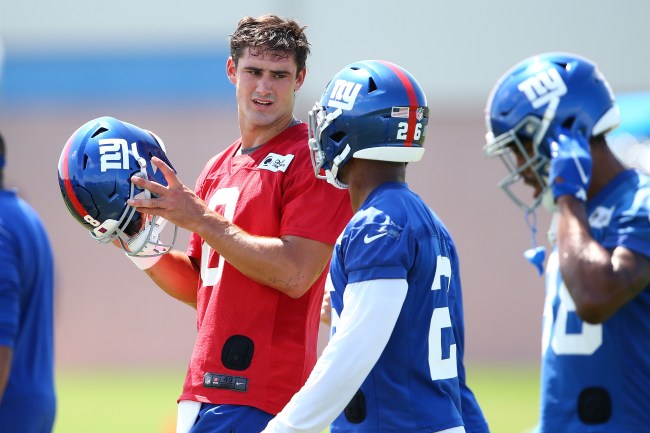 There’s a good chance NY Giants players Daniel Jones and Saquon Barkley are going to get a call from the league this week for violating the league’s Covid protocols.

On Friday night, a local New York DJ uploaded videos of Jones and Barkley, who didn’t appear to be practicing social distancing or wearing masks, hanging out at Common Ground Bar in NYC.

Giants’ Daniel Jones, Saquon Barkley caught on video partying without masks amid coronavirus pandemic | Will they be punished? https://t.co/Ko55PJNvzR

There are some questions about when the video was taken according to NJ online.

It is unclear when and where the video was taken, or whether the Giants or NFL might punish the players. An NFL spokesman did not immediately return a message seeking comment. A Giants spokesman declined to comment.

A person claiming to be DJ Lugghead emailed NJ Advance Media on Saturday and said the video is from last year, adding that the Manhattan bar where it was captured, Common Ground, “isn’t even opened.” But Common Ground is currently open, according to the bar’s website.

Just a few weeks ago 10 Las Vegas Raiders players were fined for partying at an event without wearing masks or practicing social distancing which led to commissioner Roger Goodell sending out a memo threatening to discipline teams with loss of draft picks and forfeiture of games if protocol violations led to an outbreak.

In a memo released after a call with officials of every team, commissioner Roger Goodell called on clubs to “recommit ourselves to our protocols and best practices for the duration of the season.”

Moving forward, Goodell wrote, the league will issue discipline that could include loss of draft choices or forfeit of a game if protocol violations occur that result in the spread of the virus, adjustments to schedule or other unspecified league impact.

“The protocols do not implement themselves,” Goodell added, “and our progress thus far cannot lead us to complacency. Complacency is our shared opponent.”