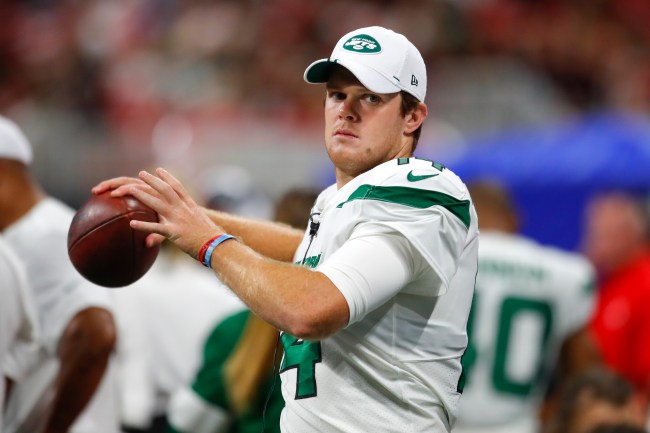 Per Adam Gase: Sam Darnold has mono and will miss Monday's game against the Browns, and perhaps more.pic.twitter.com/FPlcYoibws

Mononeuclosis has been dubbed the “kissing disease” by many because it’s usually contracted via saliva. Unfortunately for Darnold he could be out several weeks

Via The Mayo Clinic

Infectious mononucleosis (mono) is often called the kissing disease. The virus that causes mono is transmitted through saliva, so you can get it through kissing, but you can also be exposed through a cough or sneeze, or by sharing a glass or food utensils with someone who has mono. However, mononucleosis isn’t as contagious as some infections, such as the common cold.

The virus has an incubation period of approximately four to six weeks, although in young children this period may be shorter. Signs and symptoms such as a fever and sore throat usually lessen within a couple of weeks, but fatigue, enlarged lymph nodes and a swollen spleen may last for a few weeks longer.

Darnold will be "quarantined" at his apartment until Jets' medical staff feels it's safe to expose him to rest of team. He's already lost 5 lbs.

Of course, the Internet had jokes about Darnold’s unfortunate circumstance.

Sources close to me are telling me Sam Darnold contracted mono by kissing his girlfriend between lunch and fourth period math. Tough break for the Jets.

SO YOU MEAN TO TELL ME….THAT MY QUARTERBACK….CAUGHT MONO, THE FUCKING KISSING DISEASE AND IS GOING TO MISS MULTIPLE WEEKS!?

YOU GOTTA BE FUCKING KIDDING ME RIGHT NOW pic.twitter.com/C1RdRxGC0w

who gets mono as an adult? grow up and get some chlamydia. https://t.co/awxO0TJdxU

“Sam Darnold will miss Mondays game due to Mono”

Him in the locker room: pic.twitter.com/dqLSHNtnTP

“Darnold is out this week. Has Mono. Could be out several more weeks.”

Lmaooooooo throw the whole Jets away they QB is out from the kissing disease https://t.co/sLgiGlRwDf

I had mono in fifth grade and had to miss Nicole Hoffman’s roller skating party, so I can sympathize here.