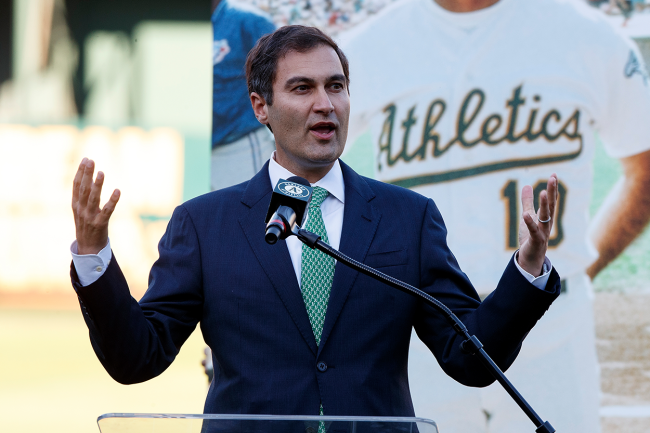 Over the course of the 2022 MLB season, the Oakland Athletics have been in the headlines for their abysmal attendance. Nobody is going to A’s games.

For one game this season, the organization announced an attendance of less than 3,000 and images from the stands was embarrassing. To make matters worse, there are said to be a lot of feral cats living in the Oakland Coliseum.

Well, on Tuesday night, Oakland A’s president Dave Kaval wanted to point out that his club is not the only one struggling to get fans in the seats.

As Oakland traveled across the Bay Bridge to face the San Francisco Giants, the attendance was also sparse. And Kaval had the time.

He spent the evening tweeting about how few people were in attendance for the cross-town rivalry at Oracle Park. His team lost the game 2-8, but Kaval was seemingly less concerned with the result and more concerned with making his point.

He started by calling out the local media who had reported on Oakland’s attendance struggles, but not San Francisco’s.

Stay strong. I wonder if the SF media is going to comment on the sparse attendance? 👀 @JohnSheaHey @annkillion @scottostler https://t.co/S0sk5Bu6lt

And then he proceeded to highlight the empty seats at Oracle Park.

From there, he started to get sassy with people in his mentions.

Wait… so the visiting team fans are supposed to fill the home ballpark? Interesting 🧐 https://t.co/nzDrjXlUmY

He even got somewhat personal and fired direct shots at the Giants and local media.

It is sad how few fans are at the game. Maybe the local media can look into the @SFGiants marketing? Ask some questions. Get to the bottom of what is going on. https://t.co/L19GDlqGYd

Once again, Kaval clapped back at trolls in his mentions.

And you are literally a seagull. https://t.co/JdebpYM38L

To finish out the night, the president of the Oakland Athletics drove his point home by bringing light to the truth of fans who had boots on the ground.

Kaval was named the seventh president of the Athletics in November of 2016. It took him six years, but he is not keeping quiet about what he sees as a double standard anymore.