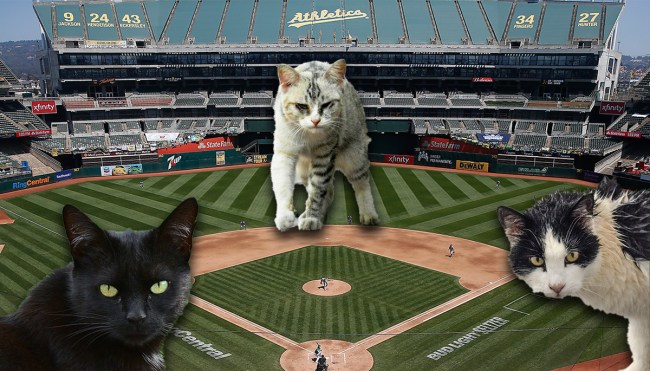 If you’re Somewhat Online, you’re likely familiar with the “Feral Hogs Tweet” that sent the internet ablaze a few years ago after a discussion about gun control took an unexpected turn when the user responsible inquired how he was supposed to take care of the “30-50” feral hogs that descend upon his yard whenever his kids play outside.

The problem at the center of a tweet that was widely interpreted as an absurd form of trolling was actually a very real issue; in recent years, experts have repeatedly sounded the alarm about the hordes of diseased-riddled swine that have made life a living hell for people in the many communities they’ve invaded (not even Shakira has been immune from their wrath).

Now, KRON4 reports Oakland Coliseum has a similar issue on its hands in the form of the 30 to 40 feral cats that have taken up residence in and around the stadium that was once home to the Raiders and currently plays host to the Athletics.

The outlet spoke to officials who believe the felines took advantage of the largely deserted facility to, um, “repopulate” over the course of the pandemic, and while employees at the Coliseum say they’ve observed a noticeable lack of rodents and other pests, the feral cats have still been labeled a “public nuisance.”

Representatives for the Coliseum are planning to meet with the city’s animal control service later this week to discuss a possible solution that would involve capturing the cats in question and putting them in shelters where they could ultimately be adopted.

I can only hope whoever is tasked with handling the situation in Oakland is slightly more capable than the crew the Yankees dispatched while attempting to herd a single cat that wandered onto the field last season.