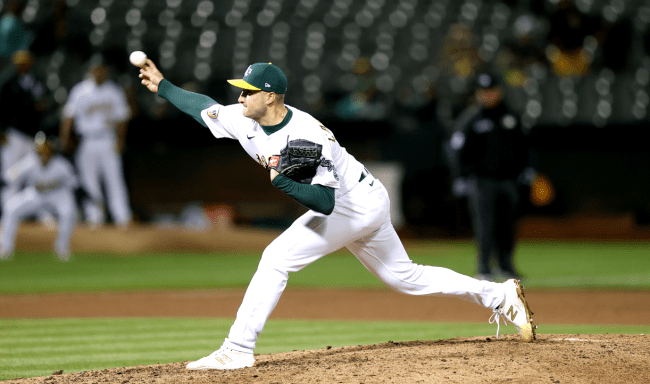 Another place that is struggling to draw fans to games is Oakland.

The A’s play in the decrepit 56,782 seat RingCentral Coliseum – the biggest ballpark in Major League Baseball – yet they currently have the lowest average attendance in the league at 10,625 tickets sold per game in 2022.

Much like in Tampa with the Rays (who are always near the bottom in attendance), it’s not like the Oakland A’s have been bad either. Over the past four seasons – all winning seasons – the A’s are 316-230 (.579) and have made it to the playoffs three times.

Yet just 11 games into a brand new season and during the second game of the first home stand of the 2022 MLB season for the Oakland A’s, here’s what RingCentral Coliseum looked like for Tuesday night’s game for the 7-5 Athletics versus the Baltimore Orioles.

Yes, the Orioles are once again abysmal (3-8), and probably on their way to their fourth 100-plus loss season in the past five years (only the pandemic saved it from being five), but there were some really good baseball players on the field Tuesday night, including Cedric Mullins, Ryan Mountcastle, Trey Mancini, and Austin Hays on Baltimore’s side.

Attendance in places like Oakland, Tampa, Miami and Pittsburgh should be embarrassing to Major League Baseball

It’s attendance like that that has the A’s doing everything they can do to either move to Las Vegas or build a waterfront ballpark at the Port of Oakland’s Howard Terminal.

The city of Oakland has been standing in the way of either of those things happening for years now and one really has to wonder why. Why do they even care?

According to the Las Vegas Review-Journal, the A’s have a final site list of five potential spots in Sin City.

“We’re in final negotiations on a couple of the options and (there’s been) really positive dialogue with the different potential partners,” said A’s president Dave Kaval recently. “We’re not at the point yet where we can make a public announcement, but we are getting closer … We want to get to the point where we can divulge the information and get the support of the community, the elected leaders and everyone involved in the process.”

🔥🔥🔥 Oakland Mayor @LibbySchaaf with some high heat ahead of MLB Opening Day. 🔥🔥🔥 pic.twitter.com/pdC4KcO8ww

There is also the fact that the proposed ballpark at the Port of Oakland’s Howard Terminal has repeatedly been stonewalled by a lawsuit by the East Oakland Stadium Alliance, and the politics being played by the Seaport Advisory Council and the Oakland City Council.

If Major League Baseball truly cares about growing the game, which very often seems dubious, then the league should be doing everything it can to have its stars playing in cities that actually support them.