CC Sabathia Says Derek Jeter Was ‘Pissed’ At Marlins Before Abruptly Quitting As CEO, Explains Why 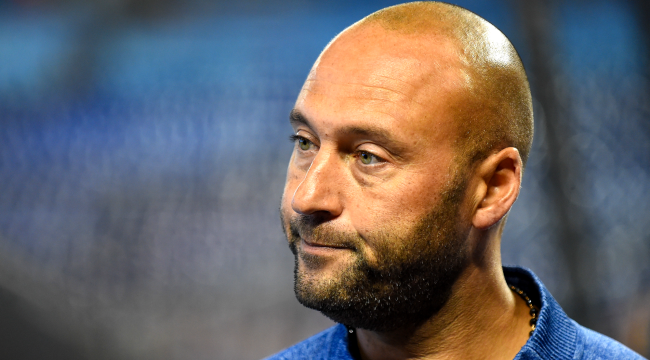 Derek Jeter’s time as a minority shareholder and CEO of the Miami Marlins will best be remembered for… well, not much.

In February, after four years with the franchise, Jeter abruptly quit the Marlins and sold his 4 percent ownership in the team.

During his tenure leading the fish, Jeter’s squad went 218-327, and that includes the 2020 season when they team went 31-29 in the shortened season and actually won a playoff series.

They also came in dead last in attendance in three of the four years, with the fourth year being a wash because of the pandemic, and set a new low mark with just 7,933 fans per game buying tickets in 2021.

Related: Marlins President Who Was Fired By Derek Jeter Has Blunt Response To Hall Of Famer Resigning As CEO

When he signed on with Miami, Jeter wrote, “Today is the first day of a new era for Marlins baseball.”

It wasn’t. It was worse.

So Derek Jeter could have chosen from a number of reasons for leaving his post as Marlins CEO, but according to his former teammate CC Sabathia, one in particular sticks out.

Why was Derek Jeter angry with the Marlins when he quit as the team’s CEO?

On Friday’s episode of the R2C2 podcast, Sabatha laid it all out when the name Nick Castellanos came up in the discussion.

“The Marlins are the Marlins, guys,” he continued. “No matter what you try to do to make them better, at the end of the day there’s just always been bad ownership. Jete did everything he could, he lined everything up for them and this is the year you sign Castellanos. They’ve got a bunch of pitching. Jazz Chisholm is a star. You’ve got Miguel Rojas playing short. Seems good, guys, like really good, he built a really good team. The minor league organization is great, but it’s just time to spend money.

“So, I just feel bad for him because I know how much time he put into that and how serious he took that job and I know he’s pissed. Yeah, it sucks, but the Marlins are the Marlins, guys.”

The Miami Marlins are an embarrassment to Major League Baseball and it doesn’t appear that they, or other teams that appear to make little effort to win, will ever change.