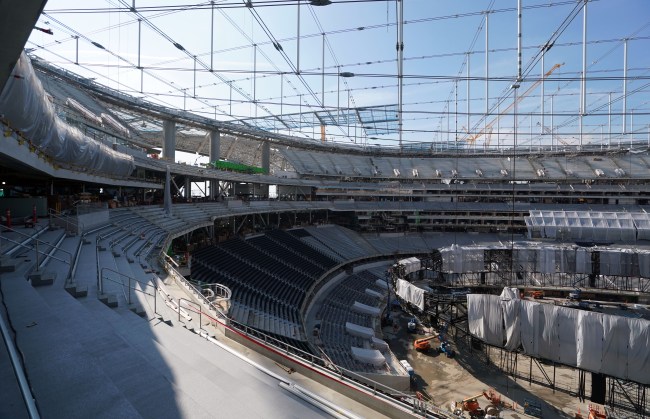 The Chargers are going to obscene lengths to acquire the fanbase they’ve struggled to attract in their move to Los Angeles, while the Ram are seemingly trying to make us forget about their putrid new logo.

The two teams will call SoFi Stadium in Inglewood, California home upon its completion in July 2020 (given the pandemic, that timeline is aspirational), with the stadium’s most anticipated component being the Oculus—an ovular, double-sided 4K HDR video board that will be suspended from the roof over the field.

The structure will span 120 yards, weigh 2.2 million pounds and contain 80 million pixels. The Oculus will have 260 speakers behind them, with 56 5G antennas.

Testing of the Oculus went down this week, and it looks to be a thing of beauty.

The Oculus inside SoFi Stadium is almost done and is being tested 🔥👀 (via edgarcia0880/Instagram) pic.twitter.com/zEj1DJ5b01

Stu Jackson of TheRams.com described what will be the first 4K HDR video system in a sports stadium:

“The only two-sided oval center-hung video board in an NFL stadium, the Oculus is the only 4k end-to-end video production in sports. It also has the largest LED content playback system ever deployed. Every face/display can be uniquely programmed with live content, statistics or animated content. The idea of having a dual-sided display is that no matter where a fan sits in the stadium, they will have a video surface in front of them.”

When SoFi Stadium opens this summer, its double-sided Oculus video board will usher in a new amenity for the fan experience.

I give it until Week 5 until the Oculus just starts playing another NFL game during Chargers games.