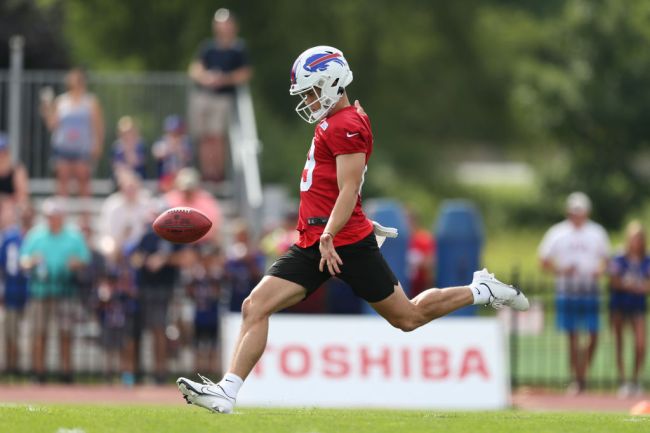 During his senior season at San Diego State, Matt Araiza did something that not many have been able to do in the past when he started getting national attention as a punter. The “Punt God” put together a highlight reel of incredible punts while breaking the NCAA record for longest average punt.

That record-breaking season earned him the Ray Guy Award for college football’s best punter, the Mountain West Special Teams Player of the Year Award, and a unanimous selection as an All-American.

Now he’s bringing his legendary leg to the NFL and he has already generated plenty of buzz after an 82 yard punt in his first preseason game over the weekend.

After seeing that punt, it seems DraftKings Sportsbook felt inclined to remind bettors that they have the option to place a wager on Araiza to win the Offensive Rookie of the Year Awards. They posted a tweet yesterday revealing that Araiza’s odds to win the award are set at +20000 or 200/1.

He’s now +20000 to win Offensive Rookie of the Year 👀 pic.twitter.com/WGoq5oeKR4

There are a few things working against the Punt God in the Offensive Rookie of the Year chase. There have only ever been 2 6th round picks in NFL history who have won the Rookie of the Year Award. Those 2 were Don Woods in 1974 and Mike Anderson in 2000.

There’s also the small problem of him being a punter. They don’t tend to get much consideration for offensive awards.

We also might not actually see much off Araiza during his rookie season. The Bills aren’t expected to be a team that punts much with Josh Allen still leading their high-powered offense.

However, whenever he does get called into action, fans should be ready to see something unbelievable from Araiza.