Ian Rapoport Gives Absolutely Pointless Reason Why Browns Fans Can Expect Odell Beckham Jr. To Be Back With Team Next Season 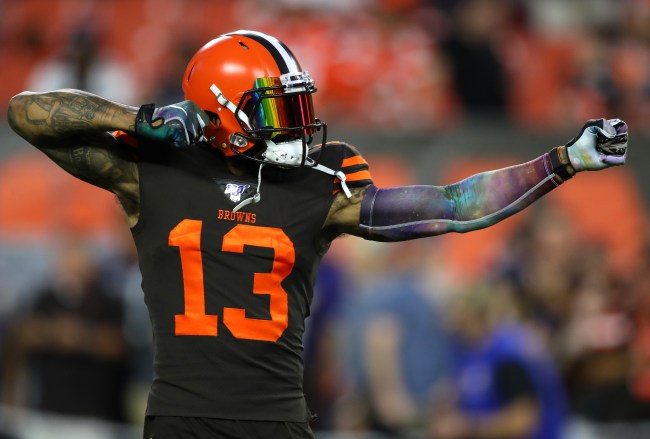 Odell Beckham Jr. and the Cleveland Browns didn’t exactly have a great first season together. After being the darlings of the NFL offseason last year, with many even picking the team to compete for a Super Bowl appearance, the Brownies got absolutely steamrolled in the first game of the season by the Tennessee Titans, fought dysfunction and a ton of distractions all year long, finished 6-10, then parted ways with both then head coach Freddie Kitchens and general manager John Dorsey. To say it was another shitshow of a season in Cleveland would be an understatement.

Lost in all the chaos of last season is this: Odell Beckham Jr. didn’t seem to have fun, and seemed just as frustrated as he was when he was losing with the New York Giants years prior. Remember, mics caught the mercurial wide receiver claiming to say “come get me” to opponents multiple times during the season, which has now led to plenty of speculation about OBJ’s future with the Browns.

Although Odell is teamed up with one of his best friends and a former college teammate, Jarvis Landry, there are still rumors floating around that the Browns may be thinking about moving the high-priced wideout. Who knows if that happens or not, but the NFL Network’s Ian Rapoport is trying to quash such whispers — and he’s using the lamest reason on planet earth to justify his opinion.

While talking about the OBJ trade rumors, Rapoport claims the Browns won’t be moving the receiver because, get this, Beckham is involved in the team’s looming (and secret) uniform reveal in April. No, seriously, that’s what a real, and respected, NFL reporter is saying. Take a look at the ridiculousness below.

From NFL Now: One more reason to believe WR Odell Beckham will be on the #Browns in 2020? He's being featured in their looming (and secret) uniform reveal in April. pic.twitter.com/PRkpMd3Eq8

Is this laughable to anyone else? Sure, it may have some merit, but, c’mon, the fact that the Browns wouldn’t trade Odell Beckham Jr. because he’s involved in a uniform unveiling is one of the dumbest things I’ve ever heard in my life. Pro sports franchises aren’t loyal for plenty of reasons, yet Rapoport makes it sound as if Cleveland wouldn’t dump OBJ because they’re getting new threads? Be better, Ian.

Who knows what happens this offseason with Beckham and the Browns, but I’m willing to go out on a limb and say that the franchise would happily trade the wide receiver to a team willing to give them a first-rounder and some young talent at other positions.