Odell Beckham Jr. Is Rightfully Pissed He Got Fined $14,000 For Wearing Pants That Were Deemed Too Short 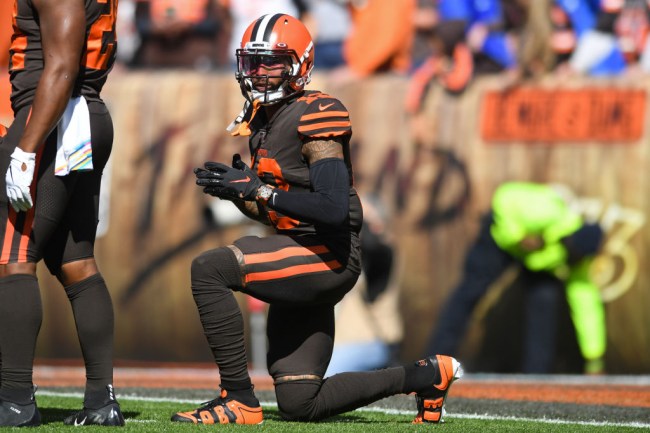 The most current iteration of the NFL rulebook is 92 pages long and it’s safe to say it’s not exactly the most compelling read in the world, so while I’d expect players to be at least somewhat familiar with what lies inside it, I think they can be excused for not devouring it cover to cover (although I wouldn’t be shocked to learn Tom Brady brings it to the beach with him).

However, it’s not exactly a secret that the league is basically a power-tripping principal when it comes to enforcing the rules and regulations and has no problem doling out punishments when they’re ignored regardless of how trivial the violations may be.

On Tuesday, Odell Beckham Jr. gave us some proof that playing in the NFL is a lot like attending an overly-strict Catholic school when he shared a letter he recently received from the powers that be informing him he’d been docked a cool $14,037 for failing to wear pants that reached his knees.

#Browns WR Odell Beckham Jr was fined $14,037 by the NFL because his pants weren’t “covering his knee area” in the Seahawks game.

OBJ can’t believe it, calls it, “ridiculous” on his instagram. pic.twitter.com/CrFfBSAZij

As Deadspin notes, Beckham addressed this issue earlier this year and blasted the absurdity of fining players thousands of dollars for essentially meaningless violations, saying:

“The NFL finds ways to just take it. They’re going to take it from you.

I understand a penalty, getting fined for that. But pants above the knees, a shirt hanging out—and we’re talking about a T-shirt that cost $5 to make—and you’re getting $5,000 taken from you. Pads above your knees, and I’m like, ‘You really think that this little knee pad covering my kneecap is going to affect, if somebody hits me, weighs 250 pounds, running 18 mph.’

I don’t do physics, but if I get hit, this is not going to protect me.”

This isn’t the first time Beckham has butted heads with the NFL over uniform violations this year, as he found himself in some hot water last month after turning some heads by wearing a ridiculously expensive watch on the field.

Sure, $14,000 is a drop in the bucket for someone like Beckham, but at the same time, it’s also fucking $14,000 so I can understand why he’s more than a little salty about it—especially when you consider how victimless the “crime” in question was.