Odell Beckham Jr. Unloaded On The Giants On Twitter After GM Dave Gettleman Threw Some Major Shade His Way 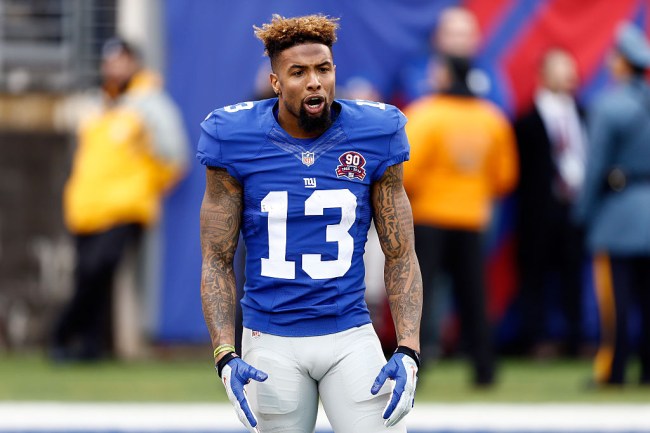 Last month, the New York Giants shocked basically everyone when they decided to trade Odell Beckham Jr. to the Browns for Jabril Peppers and a couple of draft picks, a deal that made at least one Cleveland fan take to the streets in celebration.

It wasn’t exactly a secret that the Giants were in full rebuild mode after an incredibly underwhelming campaign last season but not many people expected them to offload one of the best—if not the best—wide receivers in the league.

Shortly after the transaction, Beckham announced he was going dark for a bit in an attempt to reboot and would eventually return to social media and amp up fans of his new team with an absolutely electric video.

It wasn’t totally clear why the Giants decided to unload the superstar in the first place, but over the weekend, GM Dave Gettleman shed some light on the situation when he suggested Beckham didn’t vibe with the team’s culture—an accusation the wide receiver didn’t exactly take kindly to.

Plenty of fans voiced their support for Beckham after hearing Gettleman’s comments while others weren’t so kind, and on Monday night, the former Giant decided to hop on Twitter to let the world know how he really feels by replying to a number of people who popped into his mentions.

Here’s a sampling of what he had to say.

I gave them everything I had bruh bruh errr Sunday . Just put some respect on my name that’s all I’m sayin! I ain’t sayin nothin, n trust me I got a LOTTTTT of info that people don’t kno about so, so keep my name outcha mouth the way I do yalls ! Ya diggg

I won’t be coming back my friend. So I will enjoy it thank u!!! Forever love NY tho, u gave me my first opportunity to do what god planned for me to do! Much luv

Im not upset in ANY way about where I landed. But outta respect what they did , was crazy! And beyond disrespectful ! I wanted nothin but the best for NY. But on to a new chapter…. ITS LIFE

Ask any one of my teammates of who I was as a teammates and a man and a person…. yes I’m cancer to a place that’s ok wit losing because I want to win that BADDD. Ur absolutely correct !

“We didn’t sign him to trade him…” you don’t get married to get a divorce … I tried my best , the situation I had been in since I got there never changed … we were still losing. PERIOD… money doesn’t bring happiness brotha… remember that

Sadly, the Giants and the Browns won’t face off against each other this year and whoever was responsible for that decision needs a serious talking to.