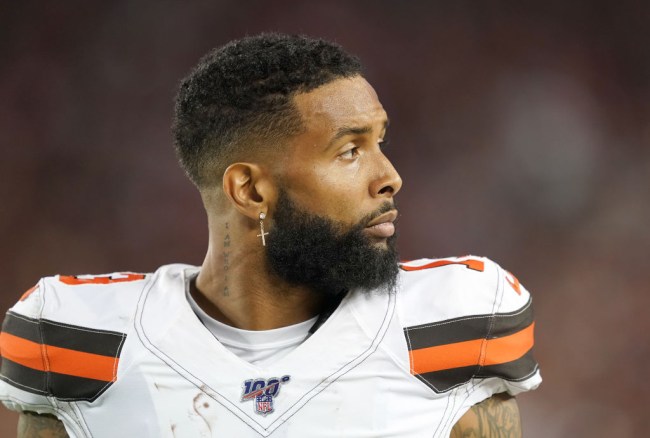 Now a postgame video has surfaced from the Browns – 49ers game from Week 5 where you can clearly hear OBJ tell Jimmy Garoppolo ‘I’ll come here’ in which Garoppolo replies with ‘I know bro, I got you.’

Sure, OBJ is covering his mouth here trying to be slick, but the camera and mic clearly pick up what he said. While it’s not a ‘come get me’ statement like what was reported a few days ago, it’s pretty much the same thing. Based off of this video, the message and vibe are pretty clear, Beckham Jr. isn’t happy in Cleveland.

Following the report getting out on Sunday, reporters asked Beckham Jr. about the situation following the Browns’ 27-19 win over the Bengals. He responded by saying ‘I’m not going to talk about any offseason stuff that’s going on right now,’ which does nothing but pour gas on the trade rumor fire. That quote makes it sound like something is brewing as far as him possibly wearing a different jersey next season.

#Browns  WR Odell Beckham Jr. on report he wants out of Cleveland, “I’m not going to talk about any offseason stuff that’s going on right now” pic.twitter.com/ha0gpEGUHs

That certainly doesn’t look or sound like a guy that helped his team come out on top in a must-win football game on Sunday. OBJ referring to the situation as ‘offseason stuff’ all but implies he’s already thinking about the offseason with three games still left on Cleveland’s slate.

Related: Odell Beckham Jr. Has Been Playing Through Serious Hernia All Season That Will Require Surgery, Per Report