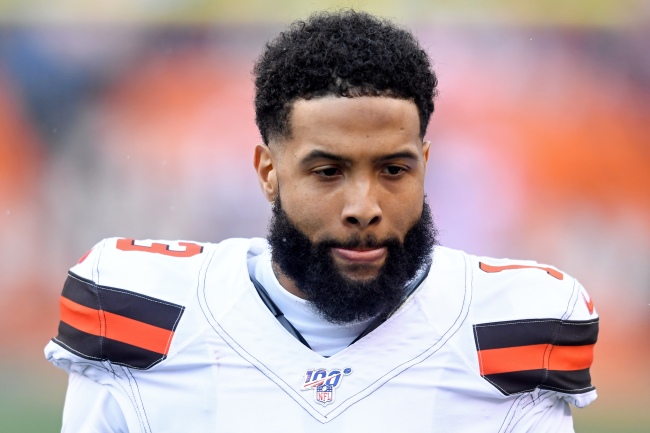 Odell likes to do what 😳🤢 Na I don’t believe this woman. can’t be true 🤦🏾‍♂️ pic.twitter.com/rndfbLhbFW

Does this scene look familiar? You may remember those 3D eyelashes popping out of your screen to brush your forehead from the viral revelation of the seven Suns servicer, just a few weeks ago:

If it ain’t broke, don’t fix it. Clearly, these ladies realized the power of a jaw-dropping athlete sex story, and today they’re back with the tale of Odell Beckham Jr.’s alleged fecal fetish.

We aren’t here to shame. If Odell enjoys the restorative powers of a human mudbath, all power to him. These elite athletes seem willing to try anything to prolong their ability to perform on the field—from acupuncture to hyperbaric chambers to ballet. If OBJ thinks that using his sternum as a poopoo platter will translate to peak performance, you won’t hear a titter from this guy.

Now, nobody seems to be saying that this has anything to do with on-field performance. Seems like this is purely a bedroom accusation. And once again, who cares. I definitely have my doubts about the veracity of this accusation, mainly because it follows so closely on the heels of these other ladies divulging the Suns story. But even if it is true, whatever. Scat fetishes are a real thing in some corners of the world. Better that than something illegal, right?

Boy, good luck to OBJ. Good thing the Browns don’t play the Bills this year. Josh Norman would have a FIELD day staking out territory in Odell’s brainspace.