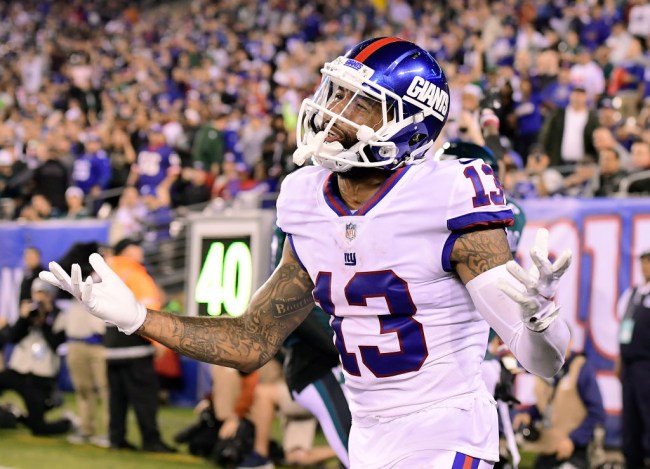 With two seconds left in the first half and the Giants down 24-6, Odell Beckham Jr. strutted defiantly into the Giants locker room while his offense was still on the field. This was just OBJ’s first act, as after the half an emotional Beckham punched a sideline air conditioner as the prospect of having the worst record in the entire league became a reality.

Odell Beckham Jr. leaves the field with two seconds left in the first half, while the rest of the #Giants offense stays on the field for one last snap. Beckham had two catches for 12 yards in the first half pic.twitter.com/KdQ7kTNWLf

After the game, a frustrated Beckham revealed the reason for his early departure. He said, via ESPN:

“I was cramping, so I was trying to get an IV,” Beckham said. “The halftime break is really only five or 10 minutes. If I can use a couple of extra seconds to go and get an IV and come out, that’s really all it was.”

Asked if he could have stayed on the field, Shurmur said: “He went back to the locker room.”

Odell’s IV excuse is likely a cover-up for his bubbling frustrations with quarterback Eli Manning. Odell was fined this week for detrimental comments about Manning’s increasing proclivity to check down passes and refusal to throw the ball over the top. Thursday’s game against the Eagles only confirmed this sentiments. This plot chart tells the whole story and is why Pat Shurmur was caught on camera throwing his hands up and yelling “throw the ball!”

2nd half more of the same for the Giants and Eli. Every completion under 7.2 yards save the last one of the game. pic.twitter.com/JXWYQNw6Jq

Odell finished the game with a modest six receptions for 44 yards. The Giants are 1-5. This saga is just getting started.