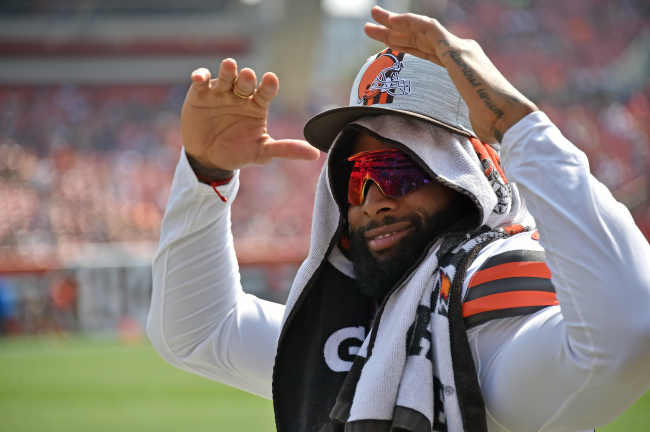 Former Cleveland Browns wide receiver Odell Beckham Jr. went unclaimed on waivers today. As a result, he is now a free agent and is free to sign wherever he wants.

Had a team claimed Beckham, it would have assumed the $7.25 million remaining on his contract for the remainder of 2021. By clearing waivers, Beckham can sign with any team for any amount.

This is the first time in his career that he has been a free agent and the decision is now entirely in his court. At only 29 years old, Beckham is considered to be a fairly hot commodity around the league.

Although his stats have not been there over the past two years, and injuries have been a concern, any team with a need at wide receiver would surely be welcome to conversation— at the very least. As such, Beckham has already said that he has a title contender with a quality quarterback in mind.

Among the teams in pursuit, Seahawks quarterback Russell Wilson is reportedly urging his team to make the move. Additionally, the Saints and 49ers have been considered to be in the mix.

However, with Wilson out for the foreseeable future, Jameis Winston out for the year, and the quarterback duo in San Francisco up in the air, Beckham is believed to have one other team in mind. Per insider/analyst Jordan Schultz, Beckham wants to play in Green Bay with Aaron Rodgers.

It is unclear as to whether the Packers have mutual interest in the signing, but the team has always seemed to lack talented depth at the position. Beyond Davante Adams, it has always been a revolving door of Allen Lazard, Randall Cobb, Marquez Valdes-Scantling and other quality, but not superstar receivers.

Lining Beckham up across from Adams would be dangerous, and the move makes a lot of sense.

The timeline for Beckham to sign with his next time is completely flexible. He could sign as soon as this afternoon or as late as Week 17.