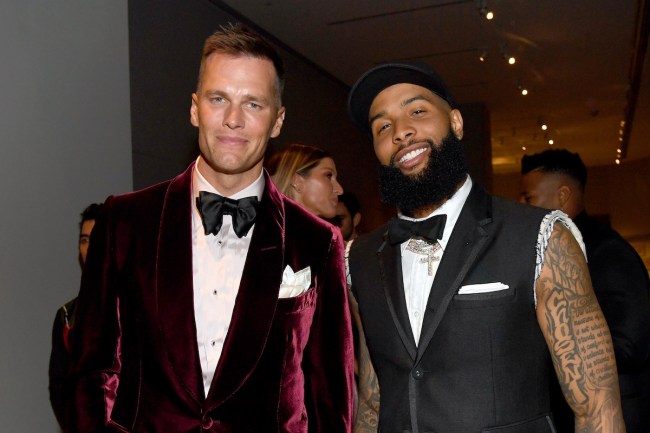 Ever since Odell Beckham Jr. got traded to the Cleveland Browns in 2019, it seems like everybody in the media has been looking to get him out of town. Rumors have flown about where the Pro Bowl receiver reportedly “wants” to go, and how he’s sick of playing for a losing franchise with a young quarterback (Baker Mayfield), and that all he really wants is to join a serious championship contender.

Could that team be the Tampa Bay Buccaneers, who just won Super Bowl 55? Makes you wonder, right?

While OBJ hasn’t said much publicly since shredding his knee against the Bengals this past season, the wideout has a serious love affair for Bucs quarterback Tom Brady. Remember, Beckham gifted the future Hall of Famer a pair of gold shoes that simply read “GOAT” on them during the 2019 season, so, yeah, there’s quite the adoration for the guy. But is a trade to Tampa Bay in the cards? According to ESPN’s Jeff Darlington, he could see it happening.

Appearing on Get Up Thursday morning, Darlington simply tossed the idea of Odell Beckham Jr. joining the Bucs this NFL offseason, which, of course, garnered some attention. Take a look below at the hypothetical idea from the longtime reporter.

“I’m going to say Odell Beckham. I’m going to say that because of the relationship between Tom Brady and Odell, fully understanding that this would take a lot to actually make this happen,” Darlington said on ESPN’s Get Up. “Keep in mind that Tom Brady did not before the start of this season pitch Jason Licht on the idea of Odell coming down to Tampa despite the fact that those guys would like to play together at some point.

“I say this because I can see going into this offseason with Odell being in a situation where he feels more expendable to the Browns than he was last year that perhaps Jason Licht would make the call.”

Could OBJ be Tampa Bay bound?@JeffDarlington on the possibility of the Bucs acquiring Odell Beckham Jr. 👇 pic.twitter.com/SXXDoY6gA3

Now it’s important to note that Darlington isn’t citing sources or information from anybody, but that this idea of Odell Beckham Jr. joining Tom Brady on the Bucs is simply a figment of his own imagination. But it makes you wonder if, just maybe, putting the idea out in the universe could make it become a reality.

Should this exact trade happen and OBJ joins Tampa Bay this NFL offseason, oh boy, it would be a serious case of the rich getting richer. Imagine a receiving corps of Beckham, Mike Evans, Antonio Brown, Scotty Miller and, depending on what happens in free agency, Chris Godwin. Add Rob Gronkowski into the mix as the tight end and… well, things get really, really scary for opposing defenses.

Go ahead and say that locker room would be filled with prima donnas and big personalities, because it would. But you know who could keep everybody focused and make sure nobody’s ego gets in the way of a team goal? Brady, who did the seemingly impossible by resurrecting Antonio Brown — which isn’t talked about nearly enough.

Of course, nobody knows for sure that the Browns are going to ship Odell Beckham Jr. out of town, but given how well Mayfield played without his stud receiver — when he looked more comfortable and wasn’t trying to force feed OBJ — Cleveland may be open to listening to offers. Would they do a deal with the Super Bowl champs just to appease their superstar wideout? Not unless the deal makes sense for them, which, as Darlington points out, would take a lot to actually happen.

Needless to say, this NFL offseason is about to be crazy, so strap on a seatbelt and get ready for a wild ride.