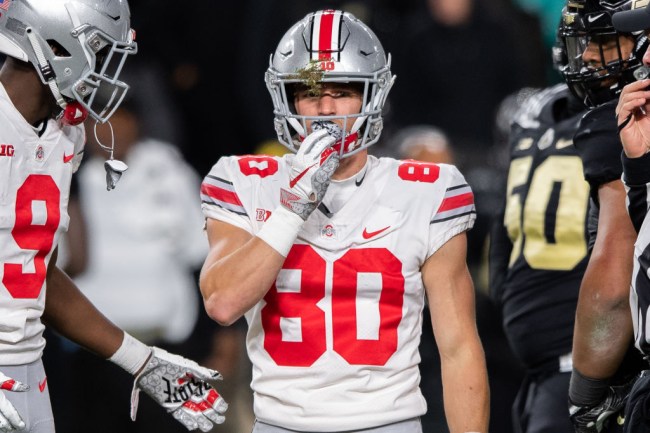 With protests going on all around the United States in response to the death of George Floyd and police brutality, many cities around the United States have enforced curfews as some people have turned to violence and looting. Columbus, Ohio has had a 10:00 PM curfew in effect since Saturday and on Monday night Ohio State wide receiver C.J. Saunders was arrested for being out past said curfew during a peaceful protest.

Saunders, a former walk-on now sixth year senior at OSU, was booked at the Franklin County Jail on Tuesday morning and is scheduled to be arraigned on a misdemeanor charge of violating curfew on Thursday.

The police report obtained by Eleven Warriors did not state whether or not Saunders was actually participating in the protest.

According to the arrest report, Saunders was walking from North High Street on West Northwood Avenue at approximately 10:45 p.m. when he was detained by a Columbus Police officer enforcing the city-wide curfew. A 10 p.m. to 6 a.m. curfew has been in place in Columbus since Saturday in response to daily protests that have taken place in the city since last week’s killing of George Floyd.

According to The Lantern, Columbus Police broke up a peaceful protest “less than 25 minutes into the citywide curfew when police used pepper spray to clear protestors out of the intersection at Lane Avenue and North High Street” on Monday night.

Saunders was a team captain for the Buckeyes last season and was one of many players and coaches who participated in a Black Lives Matter video shared by the university.