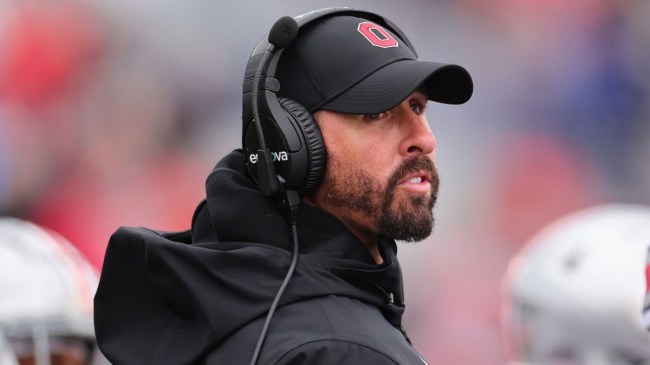 The Ohio State Buckeyes headed into this offseason needing to replace Kevin Wilson as their offensive coordinator after he took the head coaching job at Tulsa.

Today the Buckeyes announced that they would be promoting Brian Hartline, who has been the team’s wide receivers coach since 2018 and was also their passing game coordinator this past season, to offensive coordinator.

THE best in the nation and now our offensive coordinator 👏#GoBucks pic.twitter.com/wkVrchNCj2

Here is what head coach Ryan Day had to say about the move, via Eleven Warriors.

Brian has been successful in every football capacity for which he has been engaged. He has progressed incredibly well from college to NFL receiver, and then from quality control coach to wide receivers coach to passing game coordinator. He figures things out quickly and he is more than ready to now transition to offensive coordinator.

Brian has also developed his receivers at an unprecedented level and he has recruited as well or better than anyone in the country. Now he’ll be recruiting for our entire offense and I think that is something that will be really positive for our program.

The promotion is a smart move from the Buckeyes, who must have believed they were at risk of losing Brian Hartline before this promotion. His name had come up as a potential option for a head coaching job over the past couple of months.

Keeping him on the staff is a big win for Ohio State as he has led one of the nation’s most successful player groups over the past few seasons. In just a few years as the wide receivers coach for Ohio State, he has coached Terry McLaurin, Chris Olave, Garrett Wilson, Jaxon Smith-Njigba, and Marvin Harrison Jr.

Now he’ll be tasked with leading an entire offense for the first time.