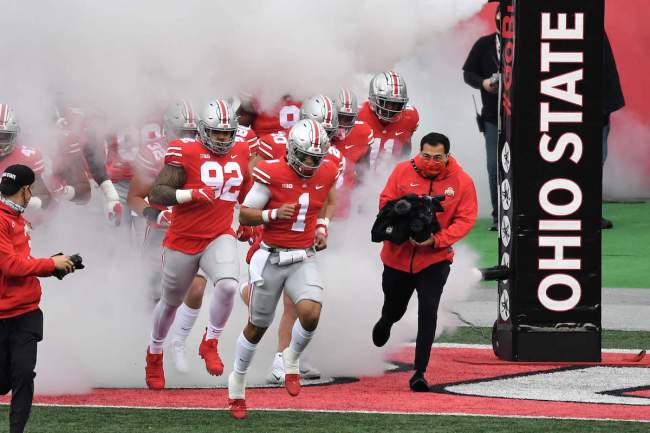 Whether you want to admit it or not, the Ohio State football team is one of the best in the nation; despite the lack of games played by the Buckeyes. I know, since it’s the Scarlet & Gray and there’s always some underlying hate about tOSU, some don’t want to see the Bucks get the chance to compete for a national title this season, and will quickly point to some B.S. rules that could keep them out of the College Football Playoff. Don’t kid yourselves, though, because this program will always get the benefit of the doubt — especially from its own conference.

Sure, while the Big 10 initially ruled that teams must play at least six games in order to qualify for the conference title game, it’s being reported that Ohio State football is getting preferential treatment and that the league is considering changing such a requirement. This is according to ESPN.

The Big Ten is expected to change its policy that teams must play six games to be eligible for the conference championship game, likely paving the way for undefeated No. 4 Ohio State to face Northwestern on Dec. 19, pending further approval in the league, sources told ESPN.

Multiple sources told ESPN the meeting [between conference athletic directors] was collaborative, and said there was a consensus that a sixth game would not change the Big Ten’s East Division standings. If Ohio State found another opponent to replace Michigan, the Buckeyes would still win the East, win or lose.

In a crazy, uncertain and unprecedented college football season, the Big 10’s at least exploring doing the right thing here. Ohio State is undoubtedly the best team in the conference, and, when all is said and done, could be the best team in the nation should the Buckeyes reach the College Football Playoff and win a national title. Robbing the program — and, more importantly, the players — from having a chance for such an opportunity because of the six-game policy would be criminal. So good on the Big 10 for looking into changing things on the fly.

After Ohio State-Michigan was cancelled, some college football fans were probably celebrating the fact that the Buckeyes would, presumably, be kept out of the national title picture. And with the team currently sitting at No. 4 in the College Football Playoff rankings, there had even been rumors that the Buckeyes could put together a contest with the No. 5-ranked Texas A&M Aggies to settle the score for the final spot.

Overall, nobody should be surprised that Ohio State football’s getting the star treatment from the Big 10 in order to keep its national title hopes alive. The Bucks are the biggest draw in the conference, have an electrifying talent in Justin Fields at quarterback, and appear to be on a crash course for a College Football Playoff spot. So while it may seem unfair to change the rules in order to cater to the Buckeyes, it’s the necessary move if the Big 10 wants to stay relevant on the national stage this college football season.

The Big Ten has announced that it has removed the minimum six-game requirement to be eligible for the conference's title game.