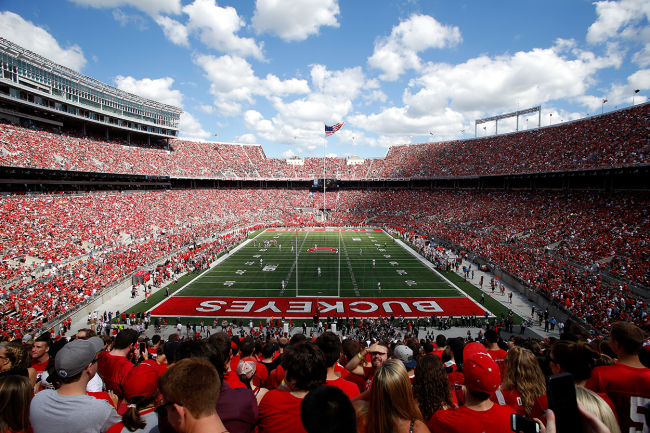 Ohio State football decided that it was time to upgrade its playing surface at the Horseshoe. To do so, the Buckeyes announced a fan contest back in October.

The premise was simple— fans were given the chance to submit their designs for tOSU’s new turf.

There are already quite a few fields that standout across the country. Most notably, Boise State plays on the blue ‘Smurf Turf,’ Eastern Washington plays on red turf, and Coastal Carolina plays on teal turf.

Ohio State also decided that it was time for a new look.

After about four months since the contest was announced, the Buckeyes released the best 48 submissions on Monday. Some were more creative and flashier than others, but every single one of the designs would have been unique, interesting and awesome.

Assuming that tOSU wanted to keep things simple, there were plenty of options that did not go over the top but added something just a little bit different. They could not go wrong.

But, somehow, some way, they did.

After holding a fan art contest, the Buckeyes went with a design that was not submitted. It took bits and pieces of the most basic submissions and it is totally lame. It looks almost exactly the same as the field that Ohio State looked to replace.

THANKS FOR NOTHING OSU. LETS BUILD HYPE THEN DO SAME EXACT THING

You put a lot of thought into this to give the people pretty much the same product. Thank you for this “competition”. pic.twitter.com/lXjZMbeUb5

lol is this a joke? pic.twitter.com/lJCwuQTL9I

Wow. Absolutely nothing different of note. Glad that contest was held.