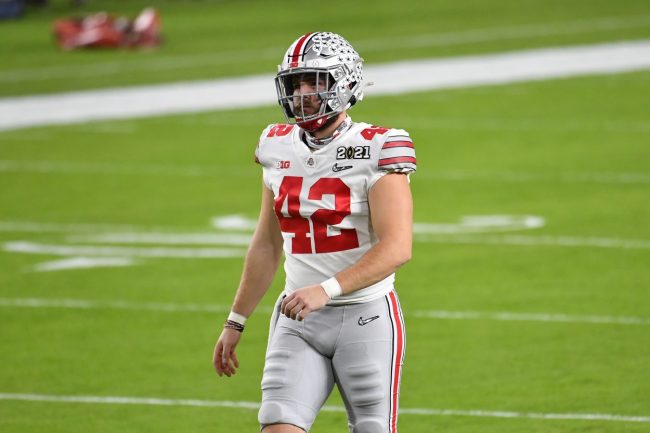 Ohio State football’s Bradley Robinson began his college career in 2016, but that isn’t stopping him from returning to the gridiron in 2022. The 6-foot-1, 230-pound long snapper announced that he is using a rare seventh year of eligibility to play for the Buckeyes next fall.

To do so, he used an incredible quote from Tommy Boy.

In the movie, the late Chris Farley’s character, Tommy Callahan, is the titular main protagonist. He is the son of ‘Big Tom’ Callahan, who is the president of a brake pad corporation.

After graduating from college in seven years, Tommy returns home to become the heir to the throne. Upon arrival, his father’s business partner — who wants to take over when Big Tom moves on — gives Tommy a hard time for his seven-year stint in college.

Robinson played into the joke, citing Tommy’s quote about being in college for such a lengthy amount of time.

This will be Robinson’s third year as the starting long snapper. He took over the starting spot in 2020, and as he said in his announcement, he believes that another year in Columbus will further prepare him to snap in the NFL.

It also allows him to complete his master’s degree and begin pursuing a PhD, which is super awesome. He has already earned two degrees in human nutrition and in human development and family sciences, and is now working on a third degree in exercise science.

Selected as a fourth-team All-American by Rubio Long Snapping in 2021, he was the No. 20-ranked long snapper out of high school before committing to Michigan State and ultimately transferring to Ohio State. His talent is undeniable.

And based on his announcement, he has a great sense of humor. How could you not love a 230-pound, seventh-year super super super senior long snapper?