Chaos Unfolds As Michigan And Ohio State Get Chippy, Throw Middle Fingers In The Tunnel After Halftime 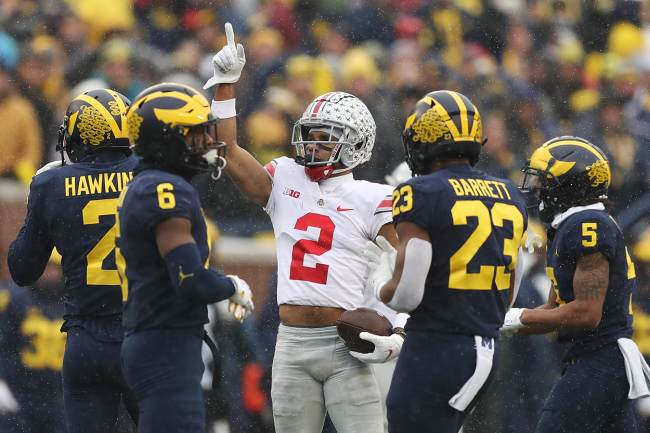 For the first time since 2016, the University of Michigan led Ohio State at halftime of ‘The Game.’ Things immediately got chippy.

The annual game between the Wolverines and the Buckeyes has been played 116 times since 1897. It is the biggest rivalry in all of college sports and the former currently leads the series 58-51-6 all-time. However, the latter has won eight of the last eight meetings.

This year’s meeting holds even more value. With both teams entering the game at 10-1, the winner was set to play for a Big Ten Championship and a spot in the College Football Playoff. The loser would not reach the Big Ten title game and would not play for a national title.

Michigan jumped out to an early 7-0 lead, but Ohio State was able to cut the deficit to four at the end of the first quarter. The Buckeyes won the second 15-minute period 10-7, but went into the locker room down one.

The intensity and deep-rooted hatred between the two sides was palpable. Literally.

As the teams came out of the locker room to begin the second half, complete and utter chaos unfolded in the tunnel. Both teams were held back by their respective coaches as obscenities and middle fingers flew across the referee-established border from both sides.

Take a look at the halftime scene:

Chaos in the tunnel between Ohio State & Michigan pic.twitter.com/HedljphBq1

Needless to say, these two schools do not like each other. That was clear on the field and in the tunnel on Saturday.