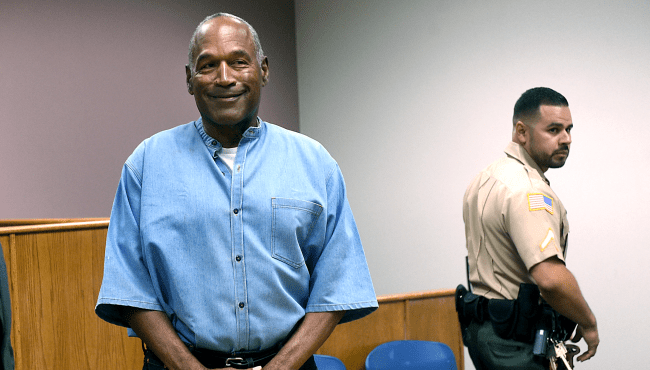 George Truly, better known as O.J. Simpson, was back on Twitter on Wednesday bringing his special brand of analysis on the world at large.

The Juice’s latest monologue focused in on the awful Henry Ruggs situation.

Given his unique perspective as a resident of where the incident took place, Las Vegas, and the fact that he is no stranger to the legal system, Simpson had a lot to say.

“Hey Twitter World, it’s me, yours truly, getting ready to tee off!” The Juice begins with a chuckle.

“Well, it was kind of a depressing morning, uh, in sports,” Simpson continued. “Henry Ruggs with the Raiders, it’s so unfortunate, young kid, promising career. He was just beginning to really start to show off and this happens.

“You know, a year ago, two years ago when they came here I did a tweet that said the biggest problem is going to be, you know, with the players dealing with night life in this town, you know. It’s Las Vegas,” Simpson said with a shrug. “A lot of big game hunters and ummm…”

[What does that even mean? Big game hunters? And how does it apply to Henry Ruggs?]

“What I was surprised is when I said that, somebody told me that the league and the team was going to provide free Ubers for the guys and it baffles me that the guys aren’t taking advantage of that.

“But we’ve still got to wait and see, I remember about a year or two ago, a Raider was arrested for driving under the influence, when he did the test he was under the influence, so, you know, my prayers and best wishes go to everybody that was involved in this, but it is so unfortunate.”

[Again, what exactly does that story about a Raider being arrested for DUI have to do with Henry Ruggs?]

Then, for some reason, The Juice veers off to talk about Odell Beckham Jr. and Baker Mayfield.

Don’t listen to the chatter outside the locker room. pic.twitter.com/e31U0T8HJP

Reactions on Twitter to whatever the hell O.J. Simpson was trying to say were as kind and supportive as one might expect.

Very sad situation, indeed. Your take is 100% on target OJ. Really sliced through the BS

Remember when AC was your Uber? pic.twitter.com/xA3yPXNvOx

The chatter I heard one time said an ex NFL guy slashed to death two people in Brentwood. You know anything about that juice?

Still find it hilarious that you’re out golfing while the person who committed a crime you vowed to bring to Justice is…also out golfing. You’re disgusting

Have fun Juice! try not to murder anyone there while you're at it

Thanks OJ, I’m sure Henry looks up to you as a fellow NFL player with experience (of ending someone’s life)

Thanks Juice! What do you think about Rodgers not getting vaccinated? I know you've always done the right thing and getting the vaccination is no exception.

There is no way OJ would ever be so selfish like Rodgers. OJ is selfless and took the vaccine so that people he loved could stay alive.